Prime Minister Narendra Modi is on a two-day Bangladesh tour. This is his first foreign trip since the Corona era began. At present, Prime Minister Narendra Modi is having a meeting with Bangladesh Foreign Minister Abdul Momin. Earlier, he visited the National Martyr Memorial in Savar, Dhaka. Here he also planted saplings and wrote his message in the visitor's book. He then reached a hotel in Dhaka, where people from the Indian community welcomed him. He also met the Dawoodi Bohra community.

Earlier, Prime Minister Sheikh Hasina herself was present at the reception of PM Modi upon reaching Dhaka Airport. Here he was given the Guard of Honor in Dhaka. Let us know that Prime Minister Modi is the chief guest in the Golden Jubilee program of independence of Bangladesh. He will also take part in a ceremony organized on the occasion of the birth centenary of Bangabandhu Sheikh Mujibur Rahman. 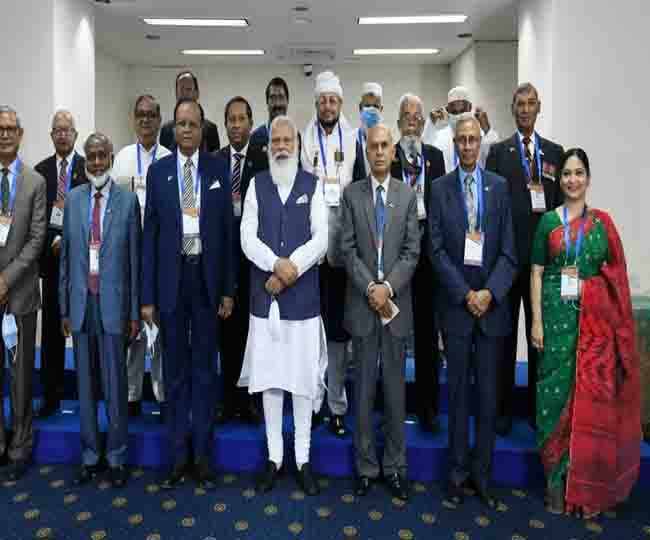 Dawoodi Bohra community in Bangladesh welcomed PM Modi in Dhaka today. The Bangladesh representative of the spiritual head of the community said that PM Modi met us when he arrived here. We requested him to start Syedna Saheb's journey from Bangladesh. 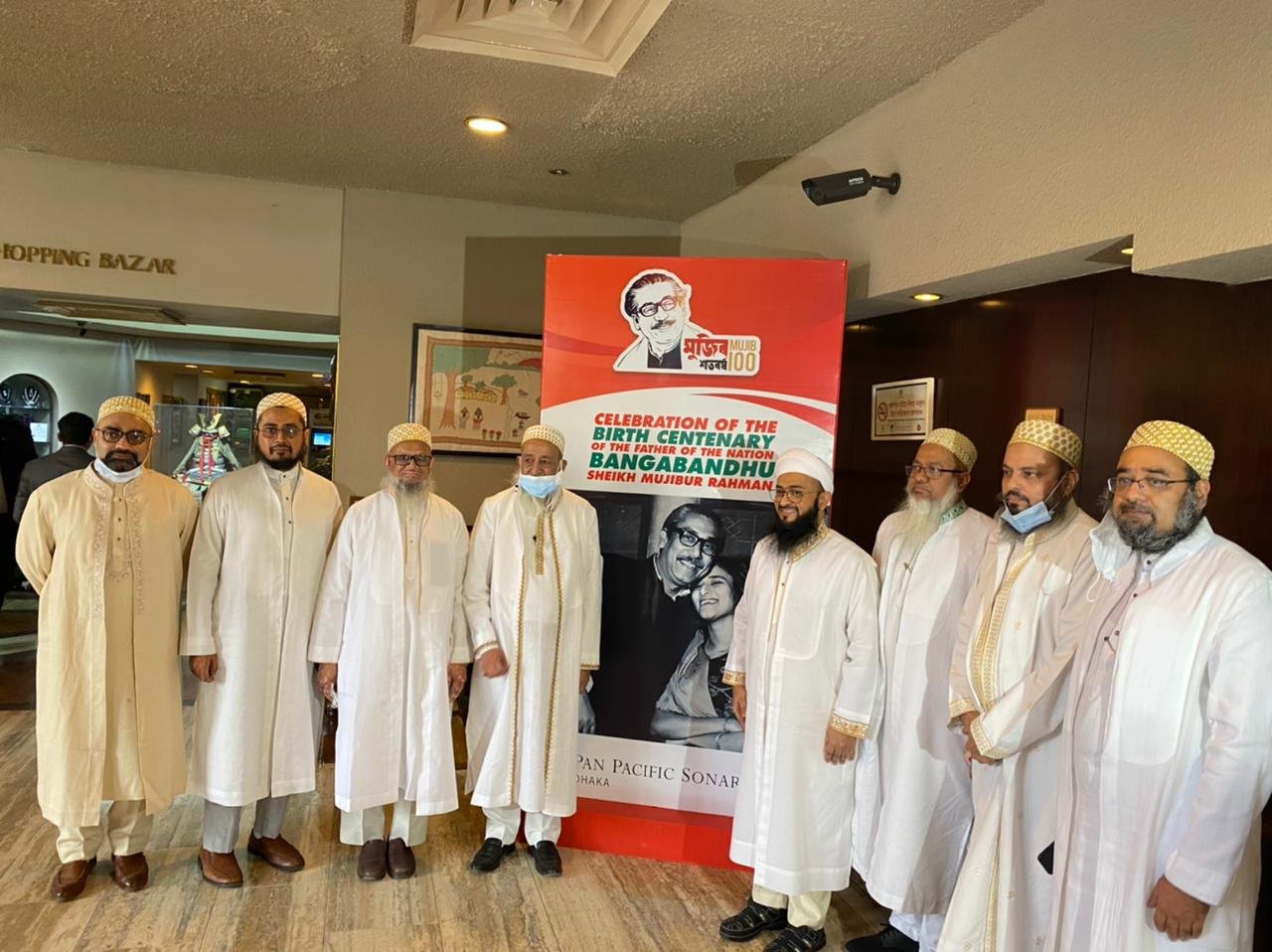 Bangladesh cricketer Shakib Al Hasan met Prime Minister Modi. The cricketer said that I am honored to meet PM Modi. I think his visit will be very good for both countries. He is leading India in a tremendous way. I hope that he will continue to help India develop in the future and our relations with India will improve day by day. He also met the Dawoodi Bohra community in Bangladesh.

Without firing, we are achieving our goals - Moman

About Prime Minister Modi's visit, Bangladesh Foreign Minister AK Abdul Moman said that the focus of the visit is a celebration. Bangladesh Prime Minister Sheikh Hasina and Prime Minister Modi have taken diplomacy to such a height that we are resolving all important issues through dialogue and discussion. Without firing, we are achieving our goals. India's eastern border is protected due to its strong ties with Bangladesh.

Bangladesh: Prime Minister Narendra Modi was welcomed by the people of the Indian community in Dhaka. 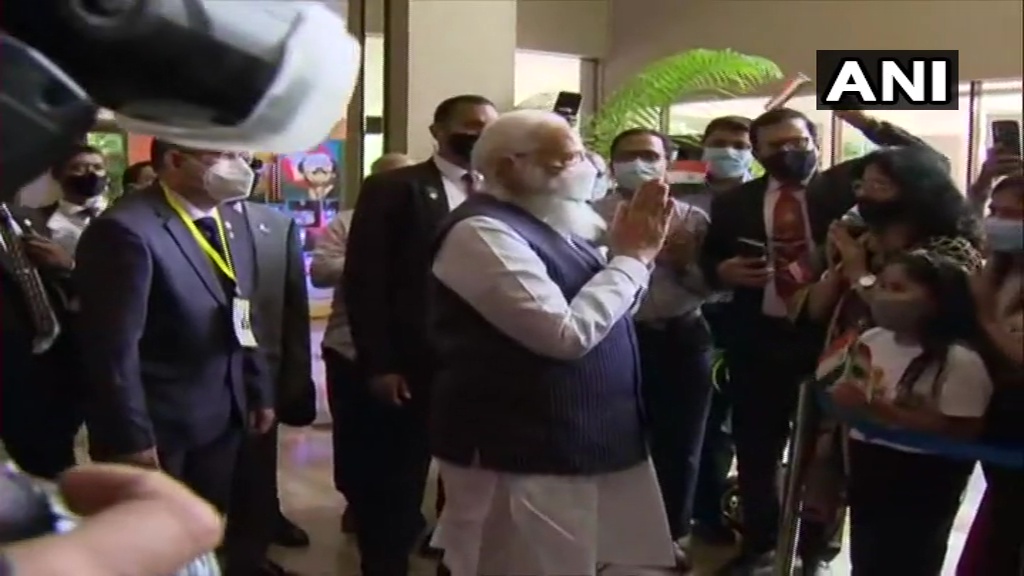 Bangladesh: Prime Minister Narendra Modi wrote his message in the visitor's book on the National Martyr Memorial of Savar. 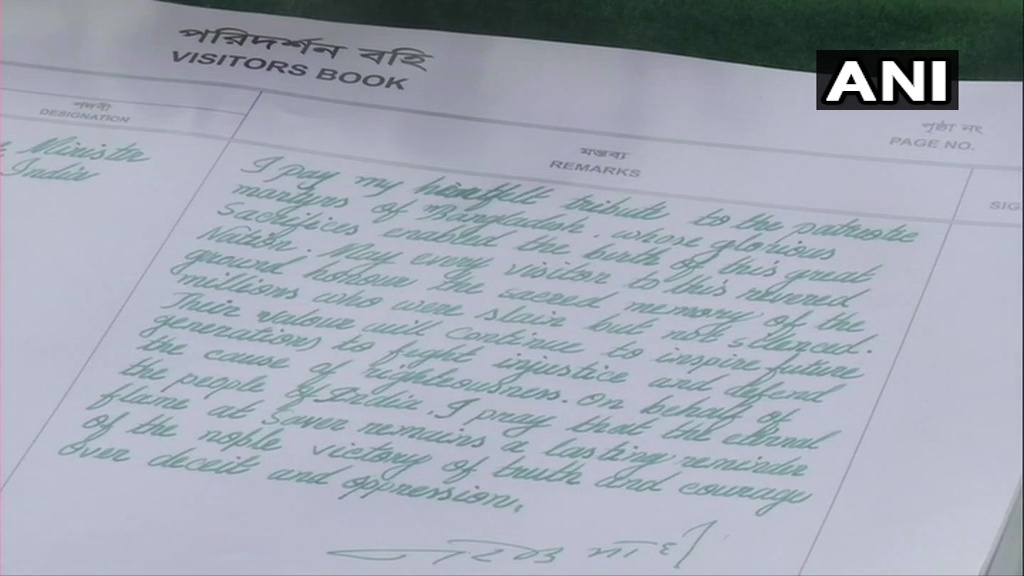 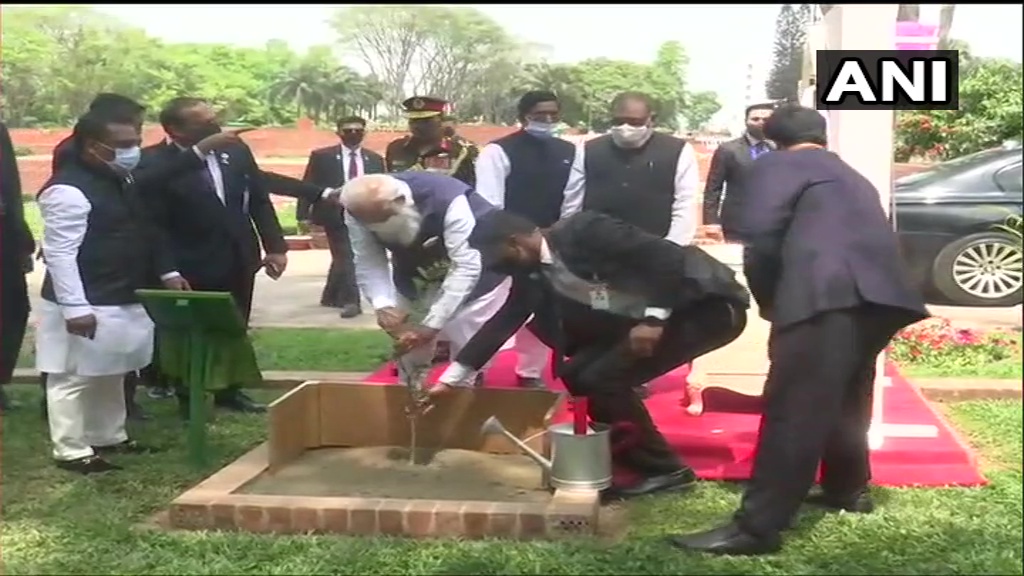 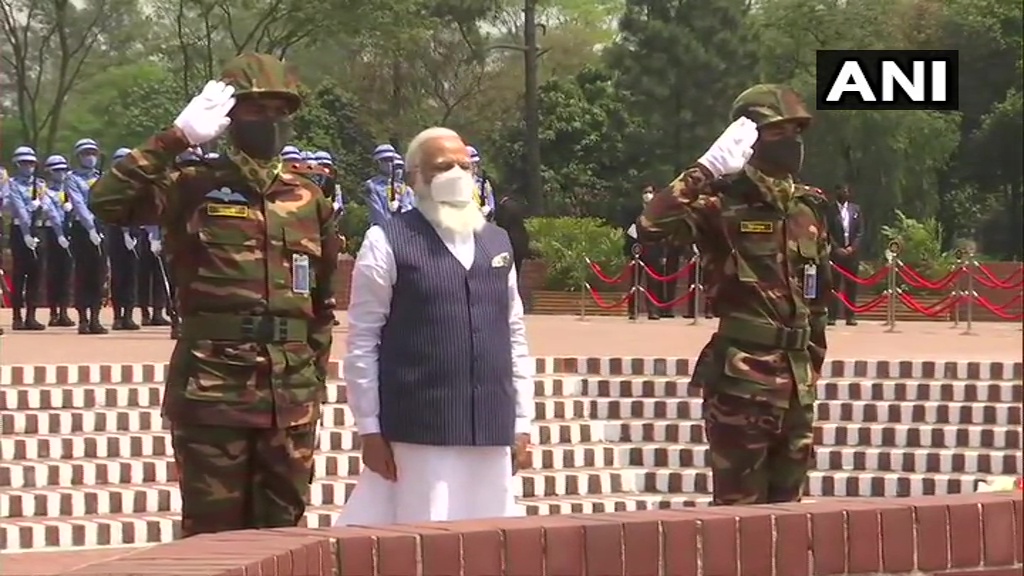 Bangladesh: Prime Minister Narendra Modi was given the Guard of Honor in Dhaka. 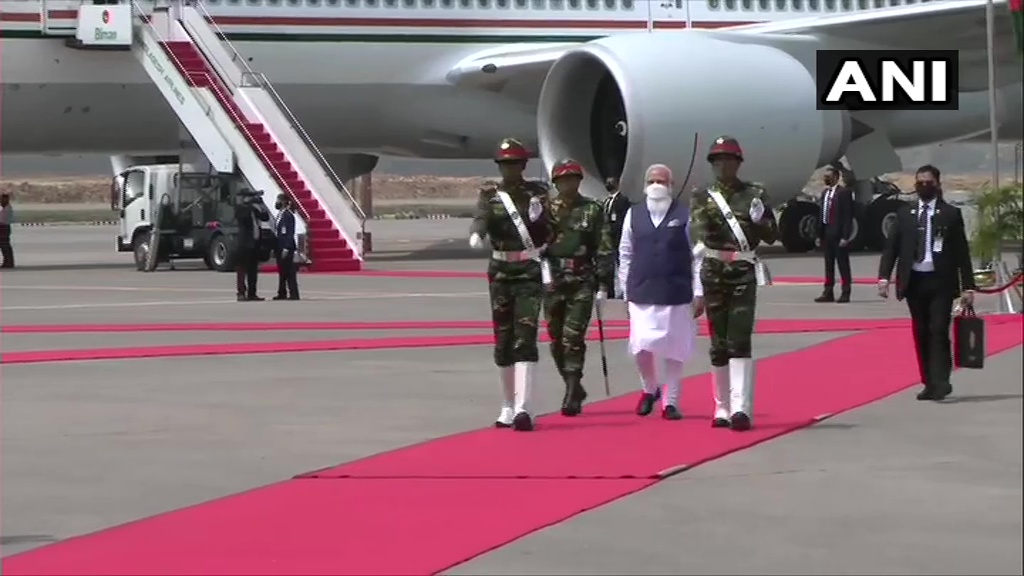 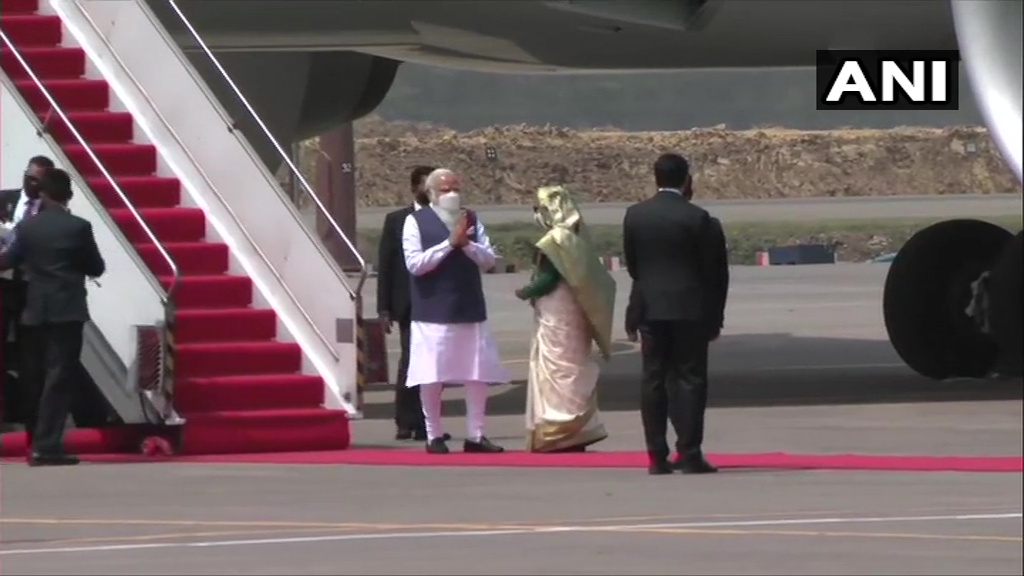 Prior to the visit, Prime Minister Modi said that he would be visiting Bangladesh on 26-27 March 2021 at the invitation of Prime Minister Sheikh Hasina. He said that he is happy that he is going to a neighboring country on his first foreign trip after the Kovid-19 epidemic. During this, he also told that he will take part in the National Day celebrations of Bangladesh on Friday and the celebrations organized on the occasion of the birth centenary of Bangabandhu Sheikh Mujibur Rahman. He praised Sheikh Hasina's leadership regarding Bangladesh's economic progress. At the same time, on behalf of India, he also said to give full support to Bangladesh. In the bilateral talks between the two, military cooperation will be specially discussed. In addition, some proposals for connectivity projects and energy cooperation are also likely to be signed.

During his two-day visit, Prime Minister Modi is also scheduled to visit Jashoreswari Kali Mandir and Orakandi on Saturday. Dileep Mukherjee, the priest of Jashoreswari Kali Temple, said that we have made full preparations to welcome him to this historic temple. We hope that he will pray for millions of people from India and Bangladesh. The ancient Hindu temple Jashoreswari Kali temple is considered very important in Hindu society. It is one of the 51 Shaktipeeths.

Will meet with matua community

After this, Prime Minister Modi will go to Orakandi in Gopalganj. Here he will visit Thakurbadi, the largest pilgrimage site of the Matua community. He will meet and address representatives of the Matua community, where Sriharichandra Thakur of this community gave his message. The last time Prime Minister Modi visited Bangladesh in 2015 was when he visited the Dhakeswari temple in the national capital. Modi's visit has become festive and the security has been enhanced with the deployment of additional security forces.

Prince Philip`s funeral today, but will not follow Prince William and Prince Harry

Indiscriminate firing in Indianapolis, US, news of many deaths

Secret meeting of India and Pakistan held in Dubai to break deadlock, RAW and ISI officials were involved

International      3 days ago
Other News