Voting is being held for a total of 30 seats in the four districts of the state.

Voting for the second phase of Bengal assembly elections is going on. Voting is being held for a total of 30 seats in the four districts of the state. These include East and West Medinipur, Bankura, and South 24 Parganas. The elections are being held following the Corona-related rules. The voting time has also been increased. Violence in many places has polled 58.15% till 1:30 pm. The round of allegations against parties is continuing. Meanwhile, West Bengal CM Mamta Banerjee visited a polling station in Nandigram. Earlier, there was a report of an attack on the convoy of BJP candidate Suvendu Adhikari from here. However, there is no harm to Suvendu. Media vehicles have suffered heavy losses. This has created an atmosphere of tension in the area. TMC has accused BJP workers of booth capturing in Nandigram.

Election commission asked for report on incidents of disturbances

Deputy Election Commissioner Sudeep Jain has called the Chief Election Officer of the state from Delhi, Ariz Aftab, and sought a report on the disturbances in various assembly seats including Nandigram.

West Bengal Chief Minister Mamata Banerjee reached Bayal village in Nandigram amid the second phase of polling. Nandigram seat is the hottest seat of the Bengal election. From here Mamta Banerjee and Suvendu Adhikari are faces to face. 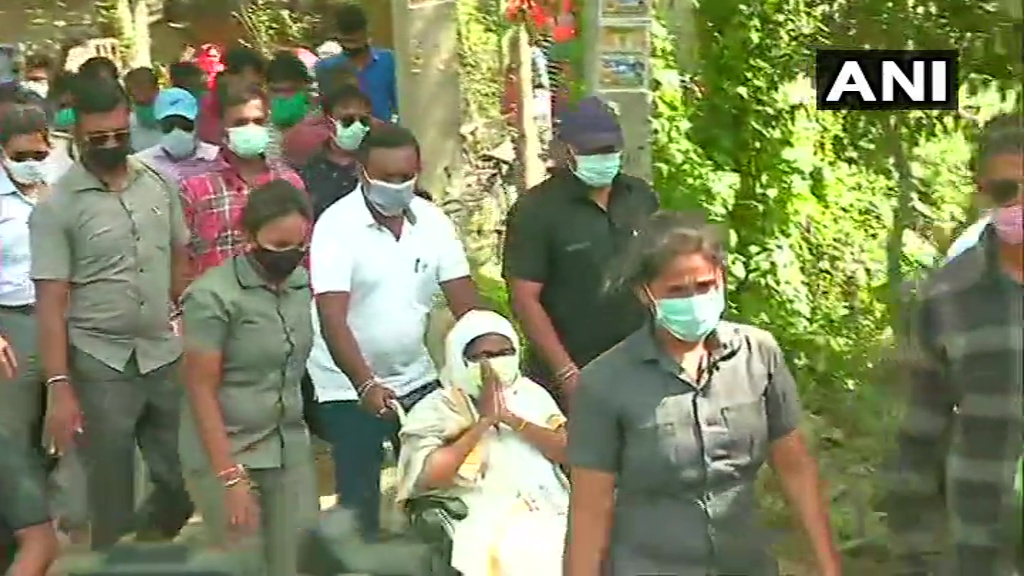 According to the Election Commission, in the second phase of the assembly elections till 1:30 pm, West Bengal has a turnout of 58.15%.

Meanwhile, the attack on the convoy of BJP candidate Suvendu Adhikari from Nandigram is reported. Suvendu Adhikari was also present in the car at the time of the attack. However, it has not damaged Suvendu's car. At the same time, the vehicles of the media have suffered heavy losses in this attack. There is a lot of tension in the area due to this incident. Let us know that Chief Minister Mamata Banerjee and Suvendu are face to face from Nandigram. After the attack on the convoy, he said that Jungle Raj is going on in Bengal. 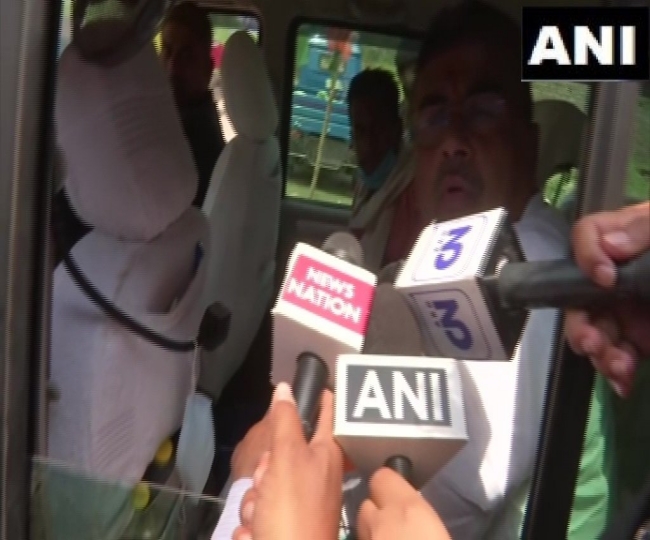 During the second phase of voting in Bengal, Trinamool Congress (TMC) MP Mahua Moitra on Thursday alleged that more than 150 electronic voting machines (EVMs) have been found to be defective since the polling began. The party has also complained to the Election Commission about this.

Violence continues between the second phase of voting. There is news of an attack on BJP's booth IT in charge of Suman Sen at booth number 177 in Mahishadal in East Medinipur district. The BJP has accused the TMC of assault.

According to the Election Commission, till 11.17 am, 29.27 percent polling has been held.

Meanwhile, there have been reports of sporadic violence from many places. Violence was reported at a booth in Keshpur in the West Medinipur district. The clash occurred when the BJP's polling agent was prevented from sitting inside the booth. The BJP has accused the Trinamool of attack.

From Bankura Assembly seat, Trinamool Congress candidate and well-known Tollywood actress Sayantika Banerjee has been accused of influencing voters by giving them money. In a video footage, Sayantika is seen going out after offering prayers at a temple in Bankura and giving money to the people. BJP has alleged that Sayantika is trying to influence voters by distributing money. Trinamool said that the matter is being unnecessarily highlighted. The tradition of giving money to the poor at the time of leaving the temple is years. It should not be viewed incorrectly. Sayantika has not yet reacted to this.

- No sensation of the body found in Digram

Sensation of the recovery of the dead body of a 51-year-old man named Uday Shankar Dubey in Booth Babu Khan fence number 28 of Bhekutia area near Tengua Mor in Nandigram. It is being claimed to be a BJP worker.

- Attack on BJP leader Tanmay Ghosh is reported. His car has been vandalized. 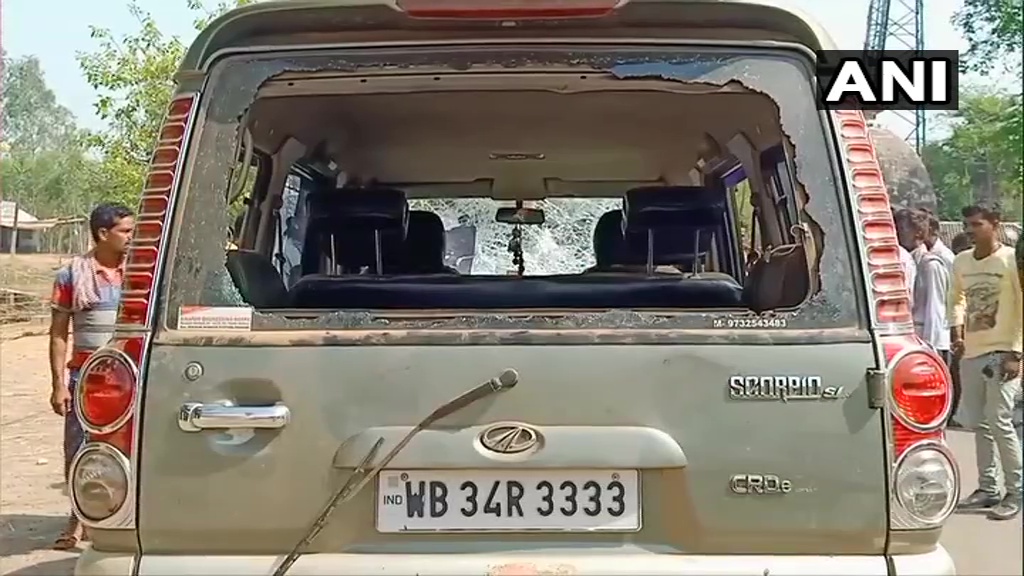 - Police arrested Mohan Singh, BJP divisional president of Debra. There was an uproar near a polling station here. Security forces are present on the spot.

A case of murder of a ruling TMC worker in West Medinipur district has surfaced before the second phase of voting in Bengal. The Trinamool has accused the BJP of killing a party worker. Police has arrested seven people in the case. There is an atmosphere of tension in the area regarding the incident. It is worth noting that in the second phase, 30 seats in many districts including West Medinipur are being voted since morning.

The second phase of the Bengal assembly elections saw 15.72 percent voting till 9.30 am amid sporadic violence.

Ruckus during polling in Debra in West Medinipur district

In Bengal, Debra assembly constituency of West Medinipur district has created a political ruckus amid the second phase of polling. Both Trinamool and BJP are blaming each other. From this seat, BJP candidate and former IPS officer Bharti Ghosh has alleged that Trinamool Congress goons are threatening their voters.

According to the Election Commission, polling has been held at 13.14 percent till 9 am.

- BJP candidate from Kharagpur Sadar, Hiran Chatterjee visited a polling station in his constituency. He said that people want change in Bengal. The Kharagpur Sadar which has gone back 100 years has to be brought back, so I am fighting on behalf of the people. People who have been persecuted for 70 years, they were ruled, looted. People here want to be free from all this. 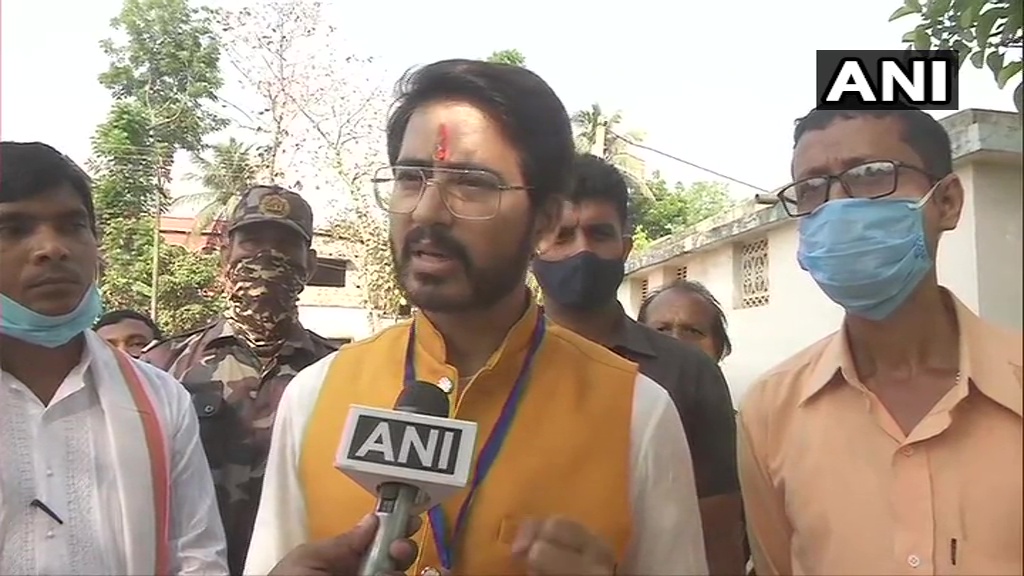 - BJP candidate from Debra constituency Bharti Ghosh has alleged that her polling agent in Nawapara is being prevented from going to the booth. TMC is surrounded by goons. In Barunia, voters are being threatened and TMC's election symbol is being shown. 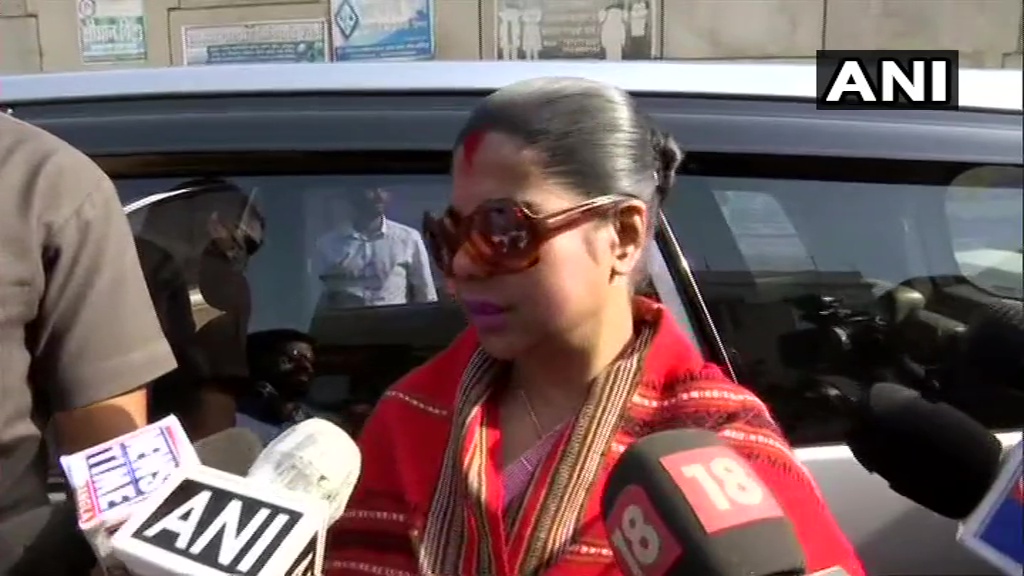 After casting a vote, candidate Suvendu Adhikari from Nandigram of Bharatiya Janata Party said that I appeal to the people to cast their votes in large numbers, because the whole nation is eyeing Nandigram. People are waiting to see if development wins or appeasement politics. BJP and Vikas will win. A wave of change is going on all over Bengal. Due to unemployment, voting is being held against Mamata Banerjee's government. There should be 80-85% turnout and there should be no violence.

- West Bengal: Candidate Suvendu Adhikari from Nandigram of Bharatiya Janata Party has left to cast a weight at the polling station in his constituency. He said that voting is going on and the situation is under control. People are expecting development. 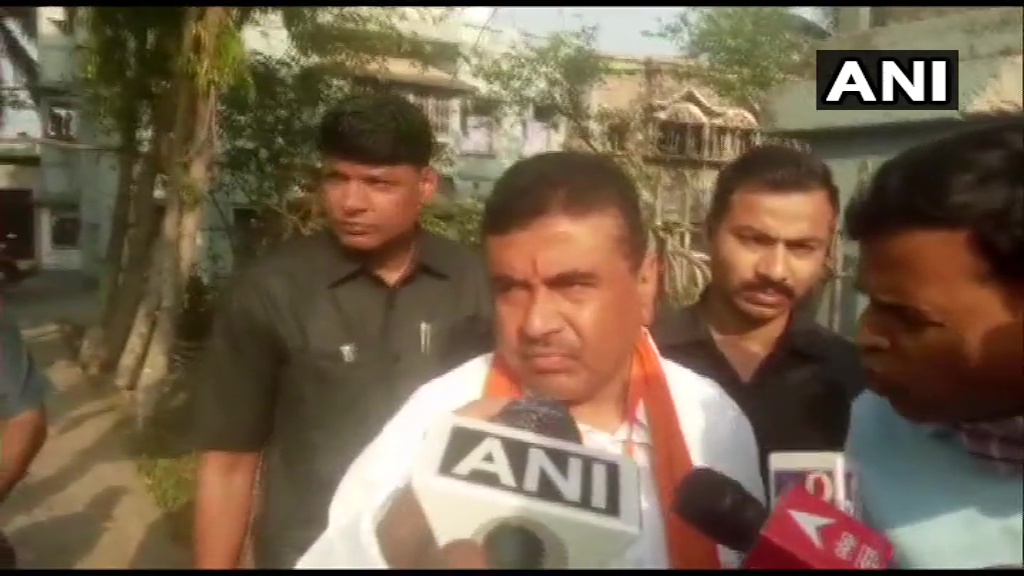 - West Bengal: Debra in West Medinipur district is going to the polls in the second phase of the assembly elections. Voting is going on today in West Bengal on 30 seats in the assembly. 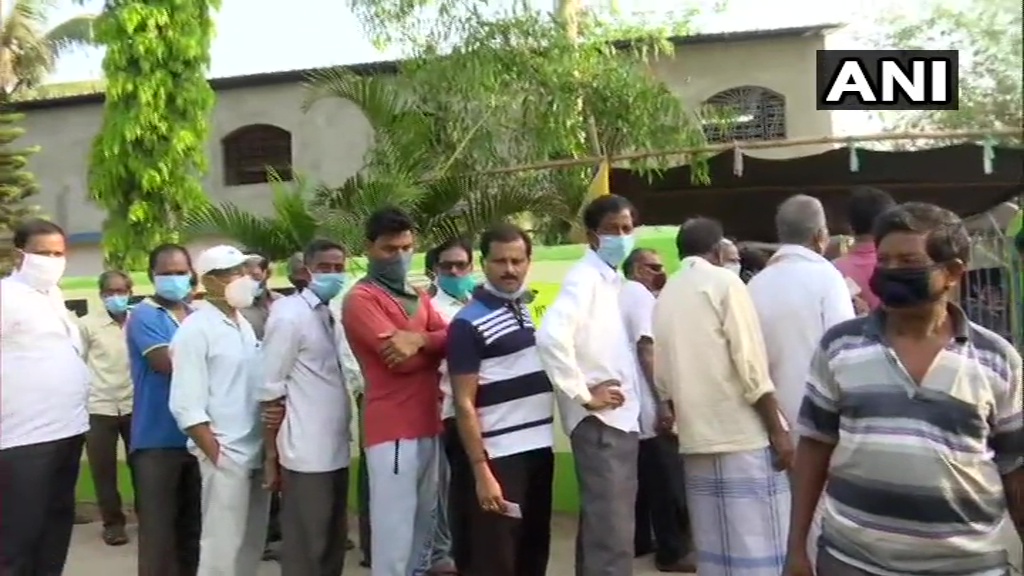 - West Bengal: Polls are going on for the second phase of the assembly in Nandigram. People at polling station number 110 while waiting for their turn to vote. 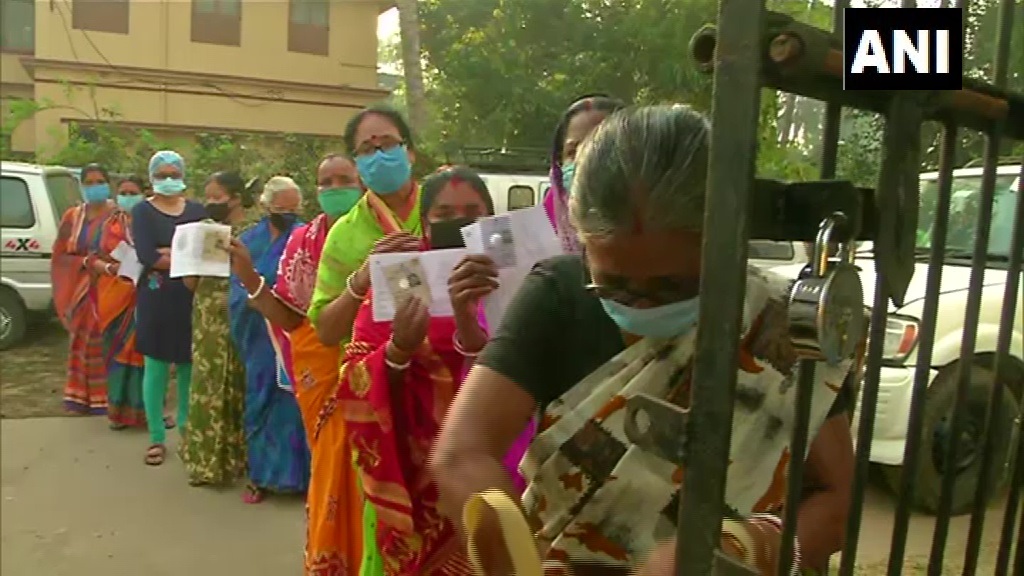 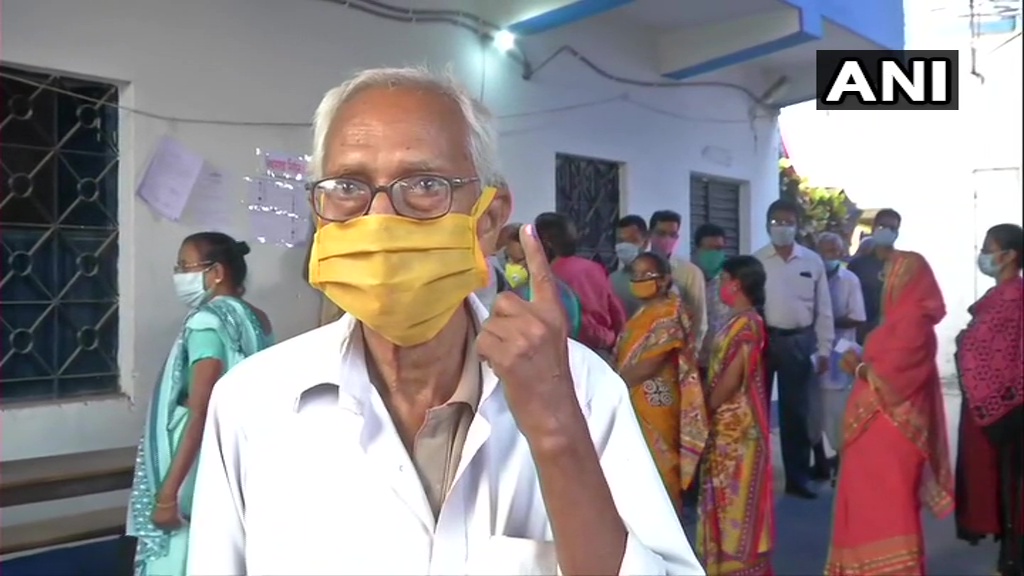 - West Bengal: Polling is being held for the second phase of the assembly elections in South-24 Parganas. Let us know that not only Bengal, the whole country is on Nandigram seat. This seat has become the hot seat of Bengal elections due to the face-to-face meeting of Chief Minister Mamata Banerjee and Suvendu Adhikari. Suvendu left the Trinamool Congress to join the BJP in December last year. The reputation of both is at stake. Tight security arrangements have been made here. Section 144 is applicable. The helicopter is also guarded. All the polling stations here have been declared sensitive. Web casting is also arranged. All the entry and exit centers of Nandigram are tightly guarded. Those who are not voters of Nandigram, their entry is also banned. There are a total of 2.75 lakh voters here.

About 800 companies of central forces deployed

About 800 companies of central forces are deployed in 30 seats in four districts. Six seats are declared sensitive. There are a total of 10,620 polling stations and around 76 lakh voters. Of the 171 candidates, 43 have criminal cases against them. A total of 171 candidates are on the fray. Of these, 19 are women and 152 are male candidates. Of these, a total of 26 millionaires are candidates. The average assets of the total candidates are Rs 96.33 lakh. Bharti Ghosh of BJP is the richest candidate from Debra seat with Rs 19 crore 21 lakh. At the same time, Chattaraj, the BSP's means from the Bankura seat, who owns 500 rupees, is the lowest property candidate. The educational qualification of 63 candidates is from fifth to twelfth, while 101 candidates have graduation and above.

Voting on how many seats in which district