Maharashtra Lockdown: 'Weekend Lockdown' in Maharashtra with 'partial lockdown' for the rest of the days

Weekend lockdown will be in force from 8 am Friday to Monday morning and 'partial lockdown' daily.

To overcome the worsening situation of Corona in Maharashtra, the Uddhav government has announced a partial lockdown on other days with a 'weekend lockdown' on Sunday. Weekend lockdown will be in force from 8 am Friday to Monday morning and 'partial lockdown' daily. This decision will then be reviewed on 15 April. There was a possibility of lockdown in Maharashtra for several days. Chief Minister Uddhav Thackeray, while addressing the state two days ago, said that after talking to all sections, he will make a decision in two to three days. Accordingly, the decision of 'weekend lockdown' has been taken in the cabinet meeting on Sunday.

Under this, there will be a lockdown across the state from Friday night to Monday morning, but during this time urgent services will remain operational. Public vehicles are also exempted from certain rules. Apart from this, under 'partial lockdown', night curfew will remain in force from 8 am to 7 am the next morning, but during this time also public services will remain operational with necessary services and some rules. For example, only two riders with a driver in an auto-rickshaw, only three riders with a driver in a taxi, only passengers with the capacity to sit in buses and local trains will be able to travel.

Goods, hotels, cinema houses, multiplexes, gyms and bars will remain closed till April 30, but vegetable markets will remain open. Here customers will be able to go and shop in limited numbers. Restaurants will remain closed, but parcel service will remain operational. Government offices will operate with half their capacity. Schools and colleges will remain closed. Private offices have been instructed to work from home. Industries will continue to operate, but sector-wise time restrictions will be imposed on them, so that the crowd can be controlled. Shooting of cinema and serials has been allowed to continue, but instructions have also been given to avoid scenes where there is a possibility of overcrowding. Only 20 people will be able to attend the last rites and a maximum of 50 people will attend the marriages.

Prior to the hastily convened cabinet meeting, Chief Minister Uddhav Thackeray discussed with Leader of Opposition Devendra Fadnavis, Maharashtra Navnirman Sena chief Raj Thackeray, some newspaper editors, people from the film and industry sectors and also sought suggestions from them. Uddhav also got positive results of this discussion. BJP leader Devendra Fadnavis's tone sounded soft after the announcement of strict rules on Weekend Lockdown and other days. Fadnavis supported the government's decision, saying that instead of a complete lockdown, we fully support the decision of weekend lockdown and partial lockdown on other days. The BJP leader also called upon the people to follow the rules laid down by the government properly. He has also asked BJP workers to help the people in the ongoing vaccination campaign in the state. Earlier, when the possibility of lockdown was being proposed, So the BJP had announced on the road to protest against this decision. The Congress, the ally of the government, was also opposed to the complete lockdown. MNS chief Raj Thackeray has also called for his workers to cooperate in the government's decision.

Amidst the rising cases of Corona, Maharashtra minister Nawab Malik said that Maharashtra would have a weekend lockdown from 8 pm Friday to 7 am Monday. Necessary services and transportation including buses, trains, taxis will be allowed. The SOP will be started from 8 pm on Sunday. Gathering of more than five persons is prohibited. Government offices will operate at 50 percent capacity. Private vehicles will be allowed to run at a seating capacity of 50 percent.

At the same time, Minister Aslam Sheikh said on Sunday that the night curfew will be imposed from eight o'clock in the morning to seven in the morning. Only essential services will be allowed. Only carry and parcel services will be allowed from the restaurant. Employees will have to work from home for offices. According to him, trains will run during the day, but a driver and two people are allowed in the rickshaw. The taxi will run with 50 percent people. Standing in buses is not allowed to travel. Priests and staff will only be allowed in religious places. Shooting of a film that gathers a lot of people is not allowed. He said that in the coming days, there is a possibility of a lockdown like Saturday and Sunday. There will be restrictions on visiting Saturdays and Sundays at open places including gardens, beaches, Gateway of India and other places.

Former Maharashtra CM and BJP leader Devendra Fadnavis said that the BJP supports the government's decision to implement the lockdown. People should follow restrictions and covid protocols. To ensure maximum immunization, BJP workers will help people reach the registration center and get vaccinated. 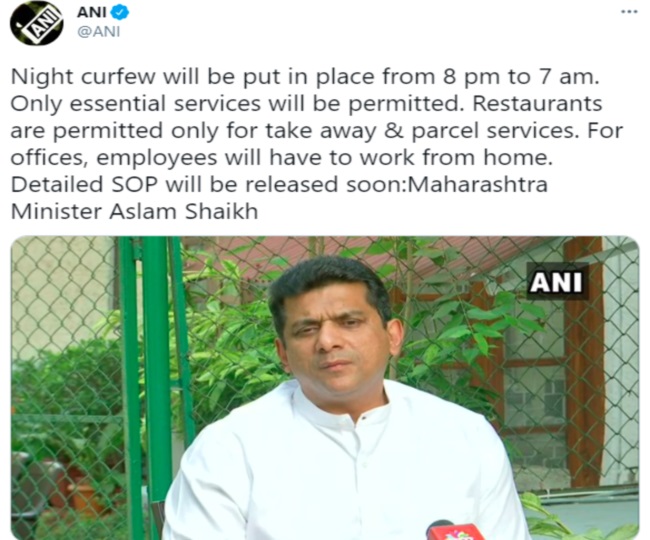