Maharashtra Home Minister Anil Deshmukh has resigned from his post.

Maharashtra Home Minister Anil Deshmukh has resigned from his post after the Mumbai High Court ordered a CBI inquiry into the Rs 100 crore recovery case. According to the Maharashtra Chief Minister's Office (CMO), CM Uddhav Thackeray has sent the resignation of Maharashtra Home Minister Anil Deshmukh to Governor Bhagat Singh Koshyari. Dilip Walse Patil has become the new home minister of the state. Dilip Walse Patil's Labor Department is being given an additional charge to Hasan Mushrif and Deputy Chief Minister Ajit Pawar will oversee the State's Excise Department.

Here, the BJP has become more aggressive after Deshmukh's resignation. Senior BJP leader and Union Minister Ravi Shankar Prasad have now started questioning the morality of Chief Minister Uddhav Thackeray. The Mumbai High Court on Monday ordered CBI to conduct a preliminary inquiry on allegations of recovery of Rs 100 crore levied by former police commissioner on Maharashtra Home Minister Anil Deshmukh. Shortly after this decision came, Home Minister Anil Deshmukh went to meet Nationalist Congress Party (NCP) President Sharad Pawar and told him that he did not think it appropriate to continue in the post till the CBI probe continued, so now he does not want to continue as a minister.

As soon as Pawar agreed, Deshmukh sent his resignation to Chief Minister Uddhav Thackeray. Deshmukh wrote in his resignation that the High Court has ordered the CBI to conduct a preliminary inquiry on the plea of ​​Advocate Dr. Jayashree Patil. Therefore, it does not seem appropriate for me to continue in office ethically Therefore, I am deciding to step down. I should be freed from the post of Home Minister. Former Mumbai Police Commissioner Param Bir Singh alleged that Home Minister Deshmukh wants police officers to recover Rs 100 crore per month. A few more petitions, including Parambir, were filed in the High Court to investigate the matter. While giving the verdict on one of these, a bench of Chief Justice Dipankar Dutta and Justice GS Kulkarni directed the CBI to conduct a preliminary inquiry into the matter. If the CBI finds important facts in the preliminary inquiry, So the CBI will register a case and start a detailed investigation. After Deshmukh's resignation, the pressure of the opposition party BJP on Maharashtra's Uddhav government has increased. Anil Deshmukh is the second minister in the Uddhav government to resign under BJP pressure within the last one and a half months. Earlier, Forest Minister Sanjay Rathod has also resigned in the Pooja Chavan suicide case.

After Deshmukh's resignation, Union Minister Ravi Shankar Prasad has told Chief Minister Uddhav Thackeray that Anil Deshmukh has resigned on the basis of morality, where is your morality. Addressing Uddhav, he said that now you have been deprived of the moral right to rule.

Leader of Opposition in Maharashtra Devendra Fadnavis also attacked the Uddhav government, saying that it was only after the report of Intelligence Commissioner Rashmi Shukla came to know that a type of Syndicate Raj was going on in Maharashtra. Deshmukh should have taken resignation immediately after all these things came out. But that was not taken. Ultimately, it has to be resigned due to the intervention of the High Court. Fadnavis also attacked Uddhav Thackeray and questioned why the Chief Minister is silent. The whole episode progressed, got complicated, opened up layer by layer, many surprising things came out, but the Chief Minister remained silent during the entire event. 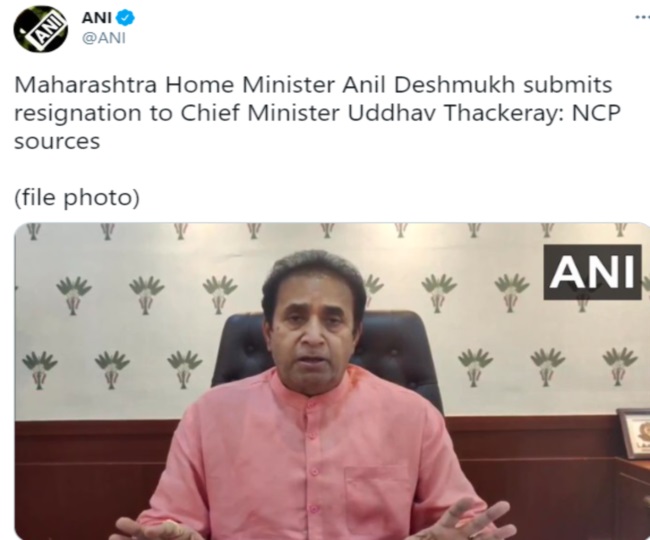 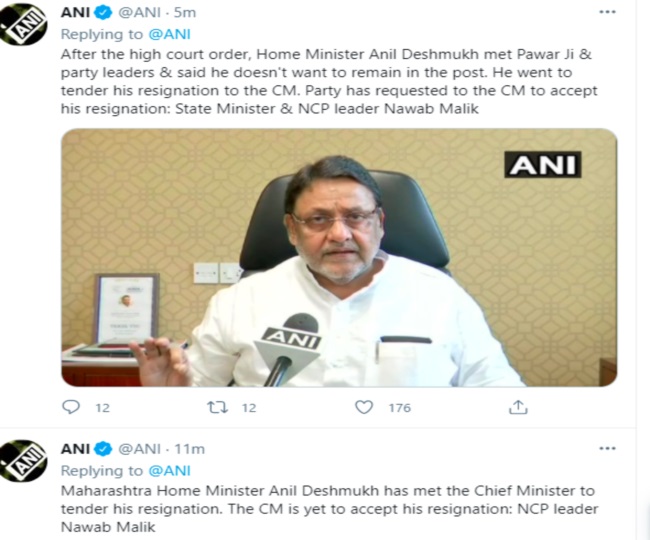