Bahubali MLA Mukhtar Ansari was handed over to the UP Police on Tuesday.

Bahubali MLA from Uttar Pradesh Mukhtar Ansari was handed over to UP Police on Tuesday. Mukhtar Ansari is being shifted from Ropar Jail in Punjab to Banda Jail of UP. After the completion of the paperwork, the UP police went out with Ansari. Around two o'clock, the UP police team came out of Ropar jail with Mukhtar. Mukhtar Ansari is sitting in an ambulance and around ten police vehicles, including Vajra, are carrying 150 policemen. The team will travel about 1800 km to bring the mafia by road. Mukhtar Ansari is expected to be admitted to Banda jail in the early hours of Wednesday. Now his new address will be Barrack number 15 of Banda Mandal Prison.

Around 6 o'clock in the evening, the police convoy has entered the Uttar Pradesh border with Mukhtar Ansari. Entry has been made from Sonepat in Haryana to Baghpat in UP via Eastern Peripheral Expressway. During this time, a lot of police force was already deployed on the border of UP. The police convoy moved towards Ghaziabad-Noida with high speed. The convoy of the police on the expressway left for Ghaziabad-Noida with high speed. During this time, the window of Mukhtar's ambulance was covered with curtains. 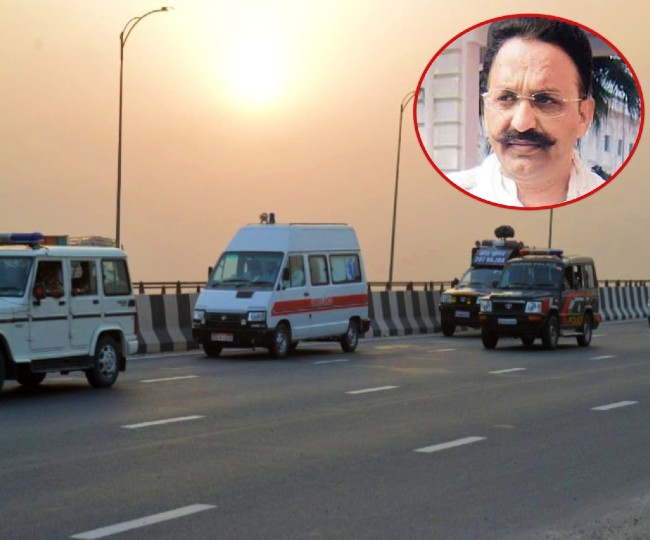 The convoy of Banda Police carrying Mukhtar Ansari stopped at Jewar on Yamuna Expressway in Greater Noida for about 20 minutes after taking fuel in vehicles and crossed the Jewel toll towards Mathura. At around eight o'clock in the night, the police convoy passed on the tappal of Aligarh with Mukhtar Ansari. After that, the police team came out of the Khandauli toll of Yamuna Expressway at around 9 o'clock in the night. The police convoy passed through the Khandauli toll plaza of Yamuna Expressway in Agra at 10.45 pm.

Eight drivers of Hamirpur to take Mukhtar to Banda jail: Eight drivers have been sent from Hamirpur to rest the driver of the vehicles involved in the convoy carrying Mukhtar Ansari. It will handle the steering of trains around Agra. The drivers coming from Punjab will be given rest. After this, here the police personnel will take Mukhtar to Banda jail. However, the SP has not confirmed it.

Many more vehicles of UP police attached to the convoy:  Police vehicles were not allowing any private vehicles to come near Mukhtar's ambulance. Several vehicles of the UP Police have been added to the convoy. It is being told that Additional Chief Secretary Avnish Awasthi and DGP Hitesh Awasthi have ordered that the UP Police convoy carrying Mukhtar Ansari will escort the police convoy of the district in which they will pass.

Family raised questions about security:  Before Mukhtar Ansari was brought to UP, his family also threatened the life of mafia. Mukhtar had also adopted several legal bets, one after the other, to stay in the Punjab jail. Mukhtar Ansari's elder brother and MP Afzal Ansari has raised serious questions on the Yogi government, terming his life as a threat. Afzal Ansari said that the way government ministers and state BJP presidents are making rhetoric, doubts are being created somewhere. Meanwhile, there are reports that Mukhtar's wife has also filed a petition in the Supreme Court regarding security during shifting.

52 cases filed against Mukhtar Ansari in UP: In the case of bringing Mukhtar Ansari to the Mohali Court of Punjab in the UP number plate ambulance, the first arrest has also been made from Mau in UP. Mukhtar has 52 cases registered in Uttar Pradesh so far, 96 members of his gang have been arrested and action has been taken to seize and demolish assets worth over Rs 192 crore. There are 15 cases under consideration against the history-sheeter criminal Mukhtar Ansari of Mohammadabad Police Station, Ghazipur, in which prosecution will now be expedited.

Officials continue to take news of the moment:  According to the order of the Supreme Court, Mukhtar Ansari is to be shifted to Banda Jail before April 12. After the Punjab government wrote a letter to the UP government, it was decided to leave the police team from Banda for Punjab, after which the police team led by the CO was sent, which has now arrived in the state with Mukhtar. During this, senior officials of the state also kept taking news of the moment from the team bringing Mukhtar. At the same time, the security cordon in and around Banda Jail has been tightened.

Attempted to bring UP 54 times:  Mafia Mukhtar was shifted from Banda Jail to Rupnagar Jail in Ropar District of Punjab on 21 January 2019. After this, an attempt was made to bring him back about 54 times in connection with the ongoing cases in Uttar Pradesh, but each time the date kept getting. Now he has come back after the direction of the Supreme Court. On Monday, a police team with more than a hundred members of the Banda Police went to pick him up.