Confession of Rs. 100 crore in recovery:NIA told- Deshmukh ordered for recovery in 1600 restaurant-bars and a minister to fetch 2-2 crores from 50 builders

In the Antilia case, the National Investigation Agency (NIA) on Wednesday presented former API Sachin Vazh in a special court. On the demand of the investigating agency, the court extended the custody of Vazhe till 9 April. Former constable Vinayak Shinde and cricket bookie Vinayak Shinde, arrested in connection with the murder of Mansukh Hiren, were also produced in the special court. The court also sent both of them to judicial custody.

On the other hand, during the NIA's inquiry, Sachin Vazh has made big revelations about former Maharashtra Home Minister Anil Deshmukh and Minister Anil Parab. According to sources, in a written statement to the NIA, I have admitted that Anil Deshmukh had asked him to recover from the bar and restaurant. He said that he had said that I have to recover from 1600 bar-restaurants. Vazhe also said that he had denied recovery. 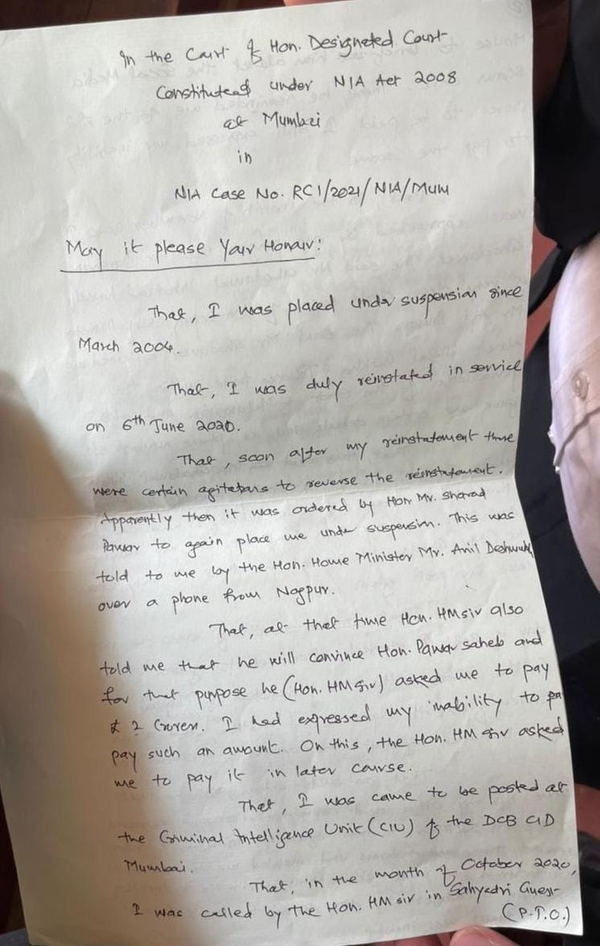 Sachin Vazh has submitted his statement to the NIA in writing.

Sharad Pawar was opposed to the restoration ofVazh, Sachin Vazh said in his statement that NCP Chief Sharad Pawar had opposed his reinstatement. They wanted the reinstatement of the tree to be canceled. He told this thing by Anil Deshmukh himself. Deshmukh had said that he would convince Sharad Pawar. However, Deshmukh asked for 2 crore rupees from Vazh in return.

Vazhe has also severely accused another Maharashtra minister, Anil Parab. He said that Parab had asked him to recover Rs 2-2 crore from 50 contractors.

On the other hand, the CBI team which reached for investigation in the recovery of 100 crores case appealed to the custody of Vazhe in the NIA court. On the appeal of the CBI, it was said on behalf of the NIA that if needed, they will allow the CBI to interrogate them.

These 7 possible questions asked by Parambir

1. On what basis was Sachin Vaz restored after being suspended for 16 years?

2. Why was he made the head of CIU despite having many seniors in the crime branch?

3. Why did they report directly to you, bypassing the protocol rule?

4. Almost all the important cases were handed over to them soon after you joined them?

5. Despite being an Assistant Police Inspector, you have never doubted my influence?

6. After getting the information about the Antilia case, why was Sachin Waze handed over the investigation despite not having jurisdiction?

7. Was any political person pressured to give special power to Sachin Vazhe?

The secret diary of Vazh's secret partnerNIA has revealed a new revelation about Sachin Vazh's secret partner Meena George. The secret diary recovered from his house revealed that he and Sachin Waze had joint accounts in several banks. From one of these banks, he withdrew 26 lakh rupees on March 18, a few days after the arrest of Vaje. The NIA investigation has revealed that Meena was absconding with the money.

Meena withdrew the money from DBC Bank in Versova, Mumbai. This has been confirmed in the statements and CCTV footage of the bank's employees. He and Meena had a joint account in the same bank. If sources are to be believed, it is written in the diary that where the money has come from and where the money is to be used? Not only this, the details of whom to send the money to are also recorded in the diary. The NIA has also recovered several passbooks and transaction slip from Meena's house.

The NIA has not yet confirmed Meena's arrest.Three days ago, the NIA also recovered an Italian Benale bike worth Rs 8 lakh registered in Meena's name. If sources are to be believed, the payment of this bike was done by Vaze. This bike was owned by Sachin Vaze for many years. This proves that Meena and Vaze had a relationship for many years.

Meena was detained by the NIA from a Thane flat. She came under attack from the agency when CCTV footage showed her meeting her. Meena went to Hotel Trident in Mumbai to meet Sachin Waze with a note counting machine. Meena is being told that she used to help White Money as well.

The NIA has not yet officially arrested Meena George. Let me tell you, Meena lived on rent in 401 number flat in C Wing of Seven-Eleven Complex on George Mira Road. This flat belongs to a person named Piyush Garg.

Science and Technology      1 hour ago