Vehicles will not run on Kundali Manesar and Palwal Expressway from 8 am on Saturday morning till 8 am on Sunday 11 April.

Thousands of farmers have started a 24-hour jam demanding the withdrawal of all three central agricultural laws. Under this, anti-agricultural law agitators have sat down by blocking the KMP toll plaza in Kundli. The Kundli-Manesar-Palwal Expressway has been closed for 24 hours on behalf of the farmers. According to information received from the United Farmers Front, the jam, which started from 8 am on Saturday, will run till 8 am on Sunday, April 11. During this time, Kundli Manesar and Palwal Expressway will be jammed.

At the same time, in the meeting held on Friday on the Ghazipur border under the chairmanship of Rakesh Tikait, national spokesperson of Bharatiya Kisan Union, it was decided that in this order, Dasna will be jammed on Saturday. Special arrangements have also been made by the Samyukta Kisan Morcha to ensure that no one has any problem during this long jam, which lasts for 24 hours. Under this, many types of discounts have been given during jams during 24 hours. 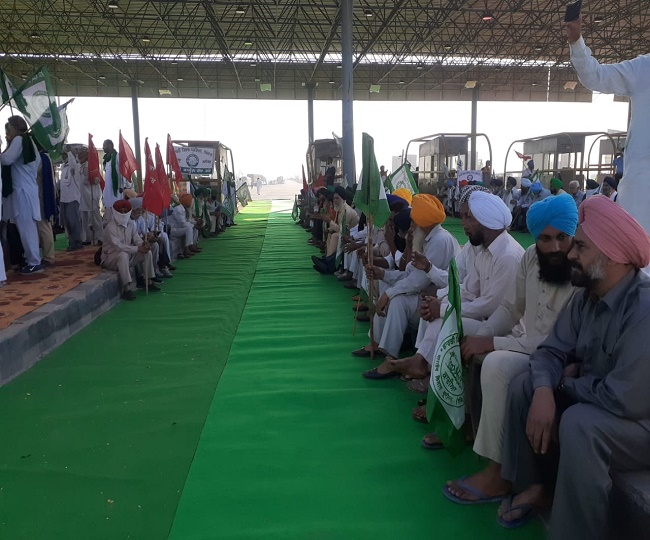 They get a discount

On the other hand, in connection with the jam at both places, Rakesh Tikait, the national spokesperson of the Bharatiya Kisan Union, has also appealed to the public and advised them to use the driver KMP for the journey on Saturday. Do not. Our movement is a people's movement and we do not want to disturb you. In such a situation, the public should support us in support of the Annadata.

At the same time, Bharatiya Kisan Union will celebrate Bahujan Kisan Ekta Divas on Ghazipur border on 14 April. It will pay tribute to Dr. Bhimrao Ambedkar. There should not be any problem with this, so food, tea, milk will be arranged on the dharna. Distribution of prescription-related to laws will also be made available to all. This information has been given by Dharmendra Malik, the media in-charge of Bhakuyu.

Protesters will go to the Tikri Border

At the same time, many people have been sitting on an indefinite protest at Ghaziabad Rajiv Chowk under the banner of United Kisan Morcha for the past several days. All Tikri will arrive at the border to jam the KMP Expressway. The president of the Morcha and senior advocate Santokh Singh said that a place is already scheduled for the demonstration. It will be performed at the same places. They say that the protest will continue till the central government repeals the three agricultural laws. On Friday, Jaiprakash, Anil Panwar, Navneet Roskheda, Yogendra Singh, Sanjay Sen, Ishwar Singh, Manish Makkad, Hari Singh Chauhan, Tanveer Ahmed, Mahasinh Thakran, Ranbir Singh Thakaran, and Prem Singh Sehrawat were included in the dharna on Friday. At the same time, Gurugram police will be on the high alert mode in view of protesters blocking KMP Expressway against agricultural laws.