The second match of the 14th season of IPL is being played between Chennai Super Kings (CSK) and Delhi Capitals (DC) in Mumbai.

The second match of the 14th season of IPL is being played between Chennai Super Kings (CSK) and Delhi Capitals (DC) in Mumbai. Batting first after losing the toss, the Chennai team gave a target of 189 runs. In response, Delhi team openers Prithvi Shaw and Shikhar Dhawan are at the crease.

Suresh Raina made his 39th fifty in the IPL. Virat Kohli and Rohit Sharma also equaled the most in terms of Fifty. The trio are jointly at number three. The highest number of 48 fifties in the league is named David Warner. Shikhar Dhawan is at number two with 41 fifty.

Dhoni has been out on zero in IPL 4 times. 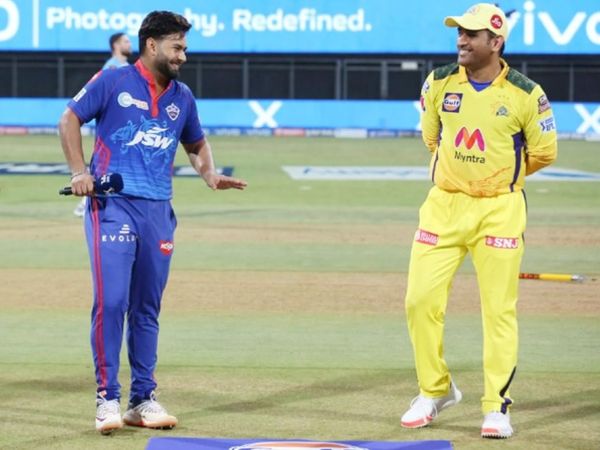 In the first match as captain, Rishabh Pant won the toss against Dhoni's team.

Rishabh Pant is captaining the league for the first time. In the very first match, he won the toss against Mahendra Singh Dhoni's CSK team. Pant, who considers Dhoni as an ideal, now has the challenge to prove himself on the captaincy fronts. Along with captaincy, there is also the pressure of good batting on Pant.

England also has two brothers Sam Karan and Tom Karan face to face in this match. Sam plays for the Chennai team, while Tom Karan's debut match for the Delhi Capitals.

Last season, Delhi defeated Chennai in both the matches.

The previous season did not end well for Dhoni's team. CSK crashed out of the playoffs for the first time and stood at No. 7. Last season, Chennai played 2 matches against Shreyas Iyer captained the Delhi team, and lost in both.

Talking about the 23 matches between head-to-head Delhi and Chennai so far, Chennai has the upper hand. Chennai has won 15 matches. At the same time, Delhi's team has been able to win 8 matches, but in the last season, Delhi had defeated Chennai in both encounters. In the first match in 2020, Delhi defeated Chennai by 44 runs and in the second match by 5 wickets.

The selectors can select the Indian team today, this opener will return for the WTC final!

IPL chairman Brajesh Patel gave information, when postponement will be done now, the remaining matches of the tournament

BCCI may change IPL plan due to Corona, now all the matches will be played in this one city

IPL 2021: 4 matches to be held in Delhi, threat may be on select venue

Today`s match was canceled in IPL 2021, these 2 players were found corona infected