LIVE: Mamta Banerjee sat on protest against the decision of the Election Commission, to hold a meeting after eight o'clock

West Bengal Chief Minister Mamata Banerjee has sat on a protest near the Gandhi statue.

West Bengal Chief Minister Mamata Banerjee has sat on a protest near the Gandhi statue against the Election Commission's decision to impose a 24-hour ban on election campaigning. Mamta Banerjee is protesting near Gandhi's statue in Kolkata. Mamta Banerjee made a controversial statement about the death of 4 people in Cooch Behar. After which the Election Commission banned him from campaigning for 24 hours. Trinamool Congress supremo and Bengal Chief Minister Mamata Banerjee will hold a day-long protest in Kolkata from 12:00 pm on Tuesday. Mamta had announced it a day earlier.

Chief Minister Mamata Banerjee is staging a sit-in in front of the Gandhi statue. No other Trinamool leaders and activists are allowed to go there. Also, no banners - the use of posters have also been allowed.

Mamta Banerjee has also been making paintings at the protest site for the last one hour. He also made a painting here and showed it to the people. Let us tell that Mamta makes very good paintings. He is very fond of it. Whenever Mamta gets free time, she makes paintings. 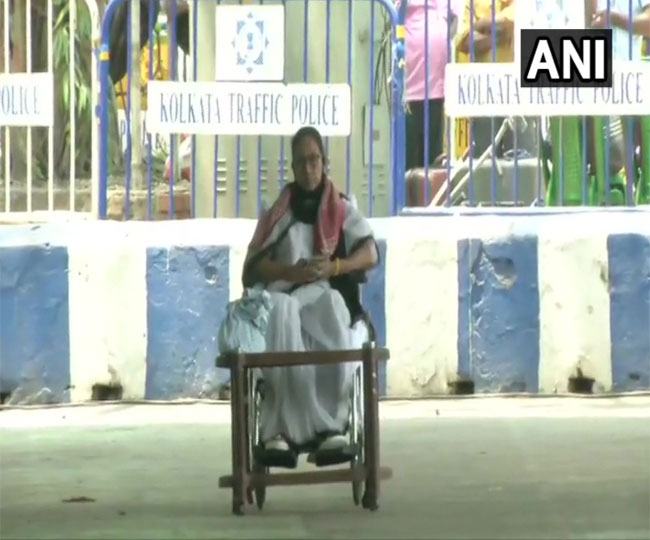 Without the permission of the army, Mamta started a sit-in in Kolkata against the ban of the Election Commission. Bengal Chief Minister and Trinamool Congress supremo Mamata Banerjee staged a sit-in in front of Gandhi statue in Kolkata at 12:00 pm on Tuesday, without the permission of the Army, against the Election Commission's decision to ban campaigning for 24 hours over objectionable statements. Sat on, In fact, the land near the statue of Gandhi in the Mayo Road near Dharmatalla is under the Eastern Command of the Indian Army. For any type of protest and program here, first, the permission of the army has to be taken. The program is allowed only after the approval of the army. But sources in the Eastern Command say that Chief Minister Mamata Banerjee sat on a protest even before the army's permission. Whereas this morning from the Trinamool Congress 9: At 00, an application was made to the army for permission to picket. The application was still under consideration that before this Mamta sat on a protest. Now everyone's eyes are on what steps the army takes regarding this. It is worth noting that soon after the Election Commission's decision to ban the campaign on Monday evening, Mamta announced a sit-in in front of Gandhi statue from 12 noon on Tuesday. After this, she sat on a protest today.

After eight o'clock in the night, Mamta Banerjee will also hold two meetings in Barasat and Vidhannagar. Here, the Trinamool delegation has submitted a memorandum to the Election Commissioner demanding a political ban on BJP leaders.

Mamta had tweeted that in protest against the undemocratic and unconstitutional decision of the Election Commission, I will sit on a protest at Gandhi statue, Kolkata from 12 am on Tuesday. After Mamata's remarks against the central forces and a statement that allegedly united with the minority community and voted in favor of the Trinamool, the Election Commission issued an order on her election campaign Monday night from 8:00 pm to 8:00 pm. Is banned. This has enraged Mamta. Here, after the protest, Mamta will also do two meetings after eight o'clock in the night.

Assembly elections in Bengal began on March 27 and the remaining four phases of the eight-phase election will be held between April 17 and April 29. Elections on 16 seats of North 24 Parganas in Panihati, Kamarhati, Baranagar, Dum Dum, Rajarhat Newtown, Bidhannagar, Rajarhat Gopalpur, Madhyamgram, Barsaat, Deinganga, Haro, Minakhan, Sandeshkali, Basirhat North, Basirhat South, and Hingalganj on 17th April Have to be. Targeting the Election Commission, Trinamool National Vice President and former Union Minister Yashwant Sinha said that every institution of democracy has been compromised. He said that we were always skeptical about the fairness of the Election Commission. But, whatever pretense it has done today, it is clear. It is now clear that the Election Commission is acting at the behest of Modi / Shah and under his direct orders. He said that every institution of democracy has been compromised today. What can we expect?

At the same time, Trinamool Congress Rajya Sabha member Derek O'Brien said that it is a dark day for India's democracy. He said, "The Commission has completely weakened. April 12 is a dark day in our democracy. We always knew that we were winning Bengal. "Adding to this, another party leader Kunal Ghosh said on the commission's decision," The commission is acting like a BJP branch. This restriction is excessive and it smells of totalitarianism. The commission's sole goal is to prevent Banerjee from campaigning as the BJP has already lost the defeat. it's embarrassing.

Know what is the matter

It is worth mentioning that while addressing a public meeting at Tarakeshwar in Hooghly district on April 3, Mamta appealed to the minority community not to let her vote be divided. Anti-political parties in Bengal, particularly the BJP, had complained to the Election Commission.

Mamta Banerjee to take oath as Chief Minister of Bengal for the third time; 50 people including Saurabh, Dilip Ghosh were invited

West Bengal Violence: JP Nadda to meet family members of BJP workers affected by violence in Bengal, will sit on dharna in Kolkata

West Bengal: Mamta meets the Governor and claims to form the government, will take oath for the post of CM on May 5