Election rallies proved to be fatal; Corona speed increases by 169% and deaths by 45% in 5 states with elections

Political parties have put the lives of people in West Bengal, Tamil Nadu, Kerala, Assam and Puducherry at risk.

Eventually, that happened, which was feared. Political parties have put the lives of people in West Bengal, Tamil Nadu, Kerala, Assam and Puducherry at risk. Election rallies are starting to prove fatal. We are not talking about this, but the figures. These figures are also indicating that the situation may become worse in the coming days. It is just a beginning.

These five states saw an increase of 169% in corona speed and 45% in deaths within the last 14 days. Just understand the number game. You will understand the situation in all the states. It will also be known that if these election rallies and gatherings were not done after gathering crowds, then many people could have saved their lives. Well, now we will introduce you to the situation of the five states one by one. 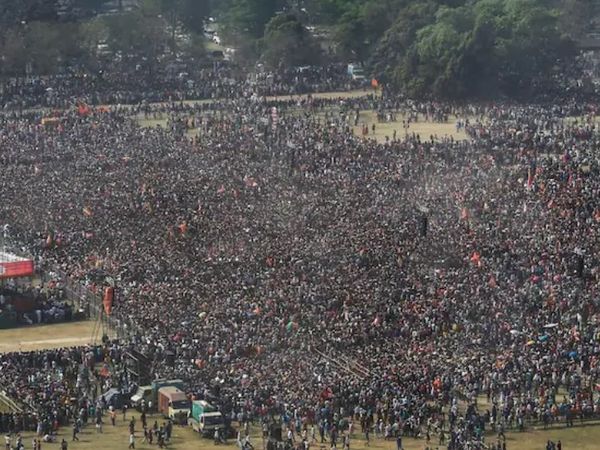 The photo is from Kolkata, the capital of West Bengal. Here on March 8, a big election rally was organized by the BJP. Many big leaders including Prime Minister Narendra Modi participated in it. Millions of people attended the rally. Meanwhile, the Covid rules were severely violated.

1. Assam: The number of corona patients has increased from 537 to 3398, starting from Assam because the figures here are quite shocking. Only 537 people were found to be corona infected between 16 and 31 March in Assam. Meaning the situation was much better during that time. Now if you look between April 1 to 14, it is reasonable to feel scared. During these 14 days, a record 3398 people were hit by the corona, which means that now the corona speed has increased to 532%. This was also seen in cases of death. While only 6 people lost their lives in March, 15 deaths have been reported within these 14 days so far. 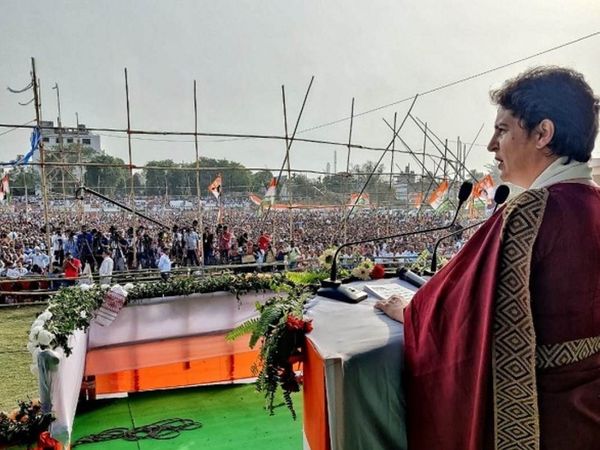 The photo is from Assam. Congress leader Priyanka Gandhi addressing the election rally here. Even in this rally, the rules of the corona were laid down. People appeared without a mask.

2. West Bengal: Only 8 thousand patients were found in March, this time in terms of more than 41 thousand elections, this time West Bengal is very much in discussion. From the Prime Minister to Mamta Banerjee, many big leaders of the country are currently doing a lot of election rallies, road shows and meetings in Bengal. In these rallies, not many but millions are gathering. 80% of these people are without masks. On stage too, you will see only one or two people wearing masks. Meaning Kovid is flying a lot of rules. The effect of this is now beginning to be seen.

Within the last 14 days in Bengal, the speed of corona has registered a growth of 420%. Only 8,062 patients were found here from 16 to 31 March, which increased to 41 thousand 927 this time between April 1-14. During this time there were also a lot of deaths. While only 32 people lost their lives in March, 127 people have died so far within these 14 days. 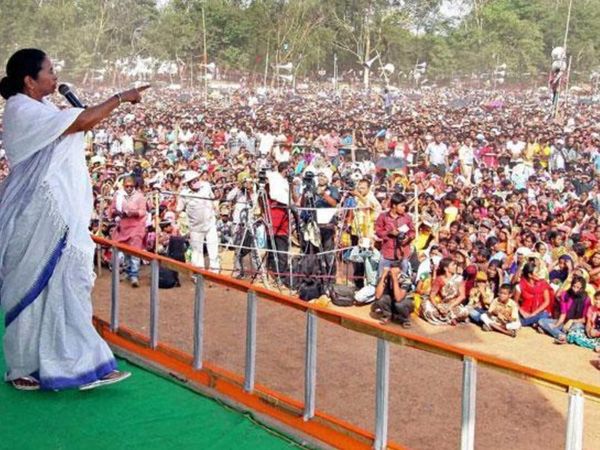 The photo is from Birbhum in West Bengal. Chief Minister Mamata Banerjee addressing the TMC election rally here. In this rally also 80% of people arrived without a mask. A lot of damage was also done to social distancing.

3. Kerala: 30 thousand patients were found in March, this time more than 61 thousand here, Corona had already broken the back of people. When the number of infected was decreasing throughout the country, it was increasing rapidly here. There was some relief in the middle, but the election again plunged the people here into the blazing fire. Political parties spread the transition by holding rallies, roadshows, and meetings such that the situation is becoming uncontrollable.

Kerala has recorded a 103% increase in the number of new patients in the 14 days of April. Between 16 and 31 March, a total of 30 thousand 390 people were found infected here, which has increased to 61 thousand 793 in April this time. There are likewise death figures. 199 people lost their lives in March, while 204 deaths have been reported in these 14 days of April so far. 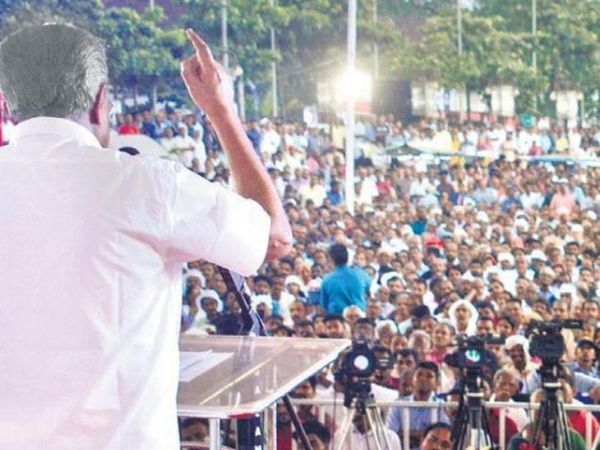 4. Tamil Nadu: Corona patients started increasing at a speed of 159% Corona cases in the state were also increasing rapidly in March, but now its speed has increased much more. If you look at the figures of 16 to 31 March, a total of 25 thousand 244 people were found infected during that period, which has increased to 65 thousand 458 between 1 to 14 April this time. The rate of infection has increased by 159%. There are likewise death figures. There were 163 deaths in March. This time, 232 people have lost their lives within these 14 days. 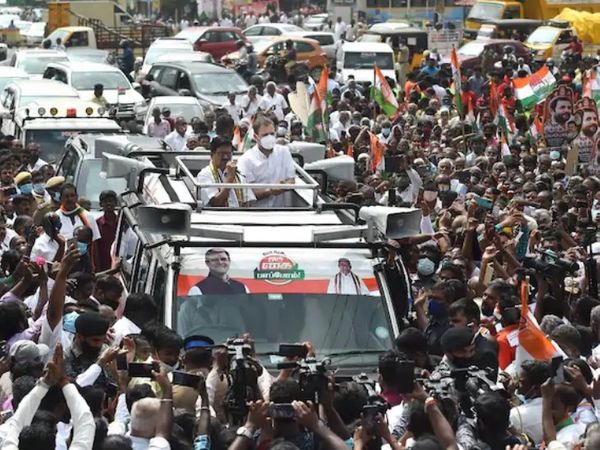 Congress leader Rahul Gandhi performing roadshow in Coimbatore, Tamil Nadu. Rahul himself was seen wearing a mask, but most of the people were walking with him without a mask.

5. Puducherry: In the first peak of the Union Territory of Corona, more than 3 thousand people were found infected in 14 days of April. Meaning, there were not much patients growing here like the rest of the states and union territories. From the last week of November to February, there used to be a maximum of 50 patients a day, but now the situation has started deteriorating. Now 400 to 500 people are being infected every day.

The rate of new cases of the corona has increased by 165%. The corona report of 1400 people came positive between 16 and 31 March. This time it has increased to 3,721 from 1 to 14 April. Similarly, an increase has also been reported in cases of death. In March, there were 9 deaths due to infection, which has increased to 15 this time. 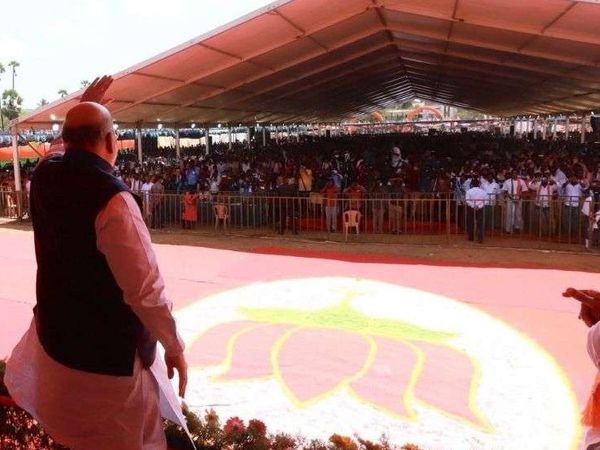 The photo is from Puducherry. Home Minister Amit Shah, who arrived here to address a rally, himself appeared on the stage without a mask. A crowd of thousands had arrived at the rally. Most people were seen without a mask.