Saw the eyes of a getaway from Mumbai: Migrant laborers waiting for the train for 3–3 days, not getting food to eat, only gets beaten by police

Between the second wave of Corona and the lockdown, people forced to return home are once again facing the tragedy of helplessness.

Sleep is lost in this journey, we do not sleep, sleep the night tired… These lines of Rahi Masculine Raza describe the helplessness of the migrant laborers waiting for the train at the Lokmanya Tilak Terminus, i.e. LTT in Mumbai.

Between the second wave of Corona and the lockdown, people forced to return home are once again facing the tragedy of helplessness. During the day, many pictures of their misdeeds are coming out, but to find out what are the difficulties at night, Bhaskar reporter reached the spot. The time spent with them from 9 am to 9 pm. You also read 6 stories of helplessness in these 12 hours ...

First Story: Workers in dilemma after lockdown, police at the station are also getting poles

These are Pappu Electricians of Bihar. On our way to the station with the family, it was discovered that a lockdown has been imposed. Now you are unable to understand whether to go to Bihar or stay in Mumbai itself.

Section-144 had come into force in Mumbai at 8:45 am, that was when LTT from Prabhadevi reached taxi by 9 am. Hundreds of people from UP-Bihar camped outside the station. Some were lying, some were sitting. No scanning was done nor social distancing was seen. Many did not wear masks. Everyone had the same question in their faces, faces, and eyes - will they reach home or not? He also had his reasons for this confusion. There is no ticket and no food.

Everyone outside the station was confused about the ticket, the train. No one to tell. If you go to the police, there are poles. Migrant laborers are surprised as to what mistake the police responsible for the safety is making. Checking everyone's ticket and announcing that they return without a ticket.

Second story: Seth did not give full money, does not even have a ticket, now how to go home

Going to Bihar at around 10 in the night, I talked to Dheeraj Kumar, who is a mason of tiles marble. He started saying, "Due to the lockdown, now we are going to the village. Worked, but the company Seth did not even give all the money this time. He said that you go, I will put it in the bank account. Last time also we were in lockdown for two months." Was stuck in Mumbai. We had to get money from the village. Even then Seth had deducted money. Even after going home, he was able to pay the debt of relatives. Now again the worry that there is no money, not even the ticket. How the village Will leaves. I have come at 3 o'clock in the afternoon. '

Third Story: There is problem in lockdown, now the decision of farming in the village itself

Pappu Sahani has to go to Gorakhpur, he works as a junk. Started this work 6 months ago. There is bound to be a problem with the lockdown. There is no savings and now there is also a shortage of food. Have to go by car at 5 o'clock in the morning. It is said that I have decided, now I will enclose wages or farming in the village.

Fourth story: People were driven to the toilet, many kept waiting for the hungry and thirsty

It will be 11 at night. Looked at the station and saw that people were being driven away from the toilet. Men were getting farther outside the station, but the problem was more for women. Some did not even drink water for this reason. There were many people who did not even have the money to buy water. When not seen, bought a few bottles of water and gave it to those who needed more. Those who were hungry remained hungry because there was nothing at the station to eat.

However, above hunger and thirst, the same thing was seen on people's faces. Do not get caught in the lockdown and return home. Some were asleep and some were awake. Some were awake for fear that no one would carry the goods. Suddenly noises were heard. It was discovered that a thief had arrived. Police used to come to eliminate the noise.

Jagannath Yadav, who is going to Bihar, says that the ticket counter remains closed and does not let him enter. Every time we get stuck in lockdown. Then it has started. If you increase, then you will die of hunger. Stations arrive from 3 pm. Did not eat or drink anything. When we went to the policeman, he said that there will be a confirmed ticket and only then we will let him go. There is no ticket and no food and drink. We are 10 people who came here to work as laborers. Now children and family members are saying that the father should come and grab any car. Now we will not come here. Will eat dry bread, but live with family.

Fifth story: Employer neither gives food nor money, can't even get ticket

Saw the engine kept in the park at around 1 o'clock in the night. People were lying here too. Some boys started saying that they had come here to work. Seth did not pay the money. The fare is bus, but tickets are not available. How to go home Seth said that work still stopped. A little while ago two Sahab came, he said that it will cost 2000 rupees from Bihar and UP. A seating seat will be available with a ticket. Where are we from, sir?

Sixth story: Householders and children are saying that Papa should come and grab a car

Jahangir, who was going to Tata Nagar, used to do tailoring in Mumbai. Told that 4 people of the village are going along. Got a general ticket with great difficulty. We have a 12 o'clock train at night but are not letting go. Now we see when we will let it in. We came to Mumbai for work four weeks ago. Last year we got stuck. Was craving for food. The money was called from the house and went by truck.

There is a huge crowd in front of the LTT station, which lacks social distancing. People worry about reaching a safer home than fearing Corona.

A large number of police buses were present at the station late on Wednesday. Most of the policemen were busy in preventing people from entering the ticket station. Many times the poles had to be rotated for this too. 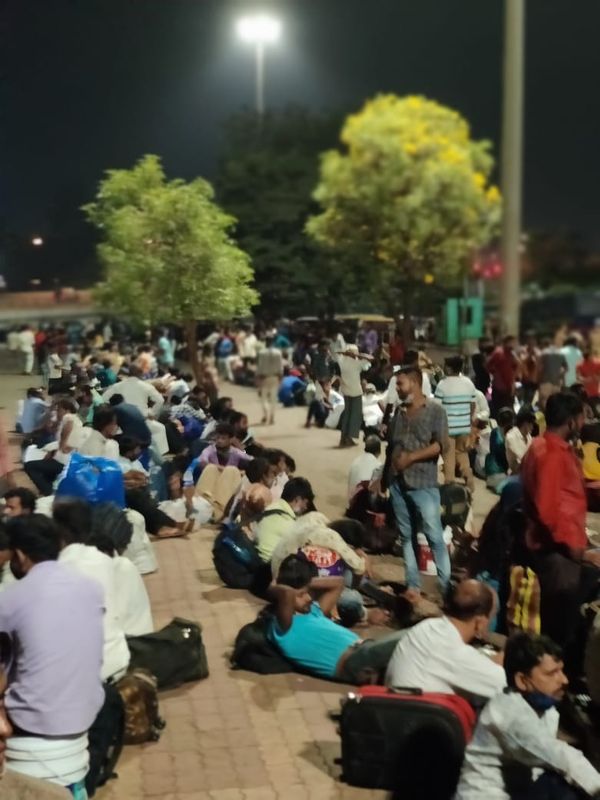 Late in the night, people queued up waiting for the train. During this time people were seen negligent about masks and social distancing.

This photo is from 9 am Thursday. People stood in long queues from the station to the auto stand.