All monuments and museums overseen by the central government closed until May 15; NEET exam scheduled to be held on April 18

According to the order issued by the Gujarat government, now after May 15, a new date sheet of the exam will be issued taking stock of the situation. The government has also decided to promote students from class 1 to 9th and 11th without exams.

Good decision of left parties in Bengal Left parties have taken a good decision in West Bengal. In view of Corona, the party has announced not to hold any major rally in the coming three-phase election. Party leaders said that now they will start a door-to-door campaign. Apart from this, online methods will also be promoted. This will prevent corona from spreading.

Student's death in IIT Roorkee, the report was negative. A student died on Wednesday night at the Quarantine Center on the campus of IIT-Roorkee. His test report came negative. A magisterial inquiry has been ordered into the matter. The 23-year-old MTech student was a resident of Chandigarh.

Garhwal division commissioner Ravinath Raman said that the student's RT-PCR test report had come negative recently. 89 students of IIT-Roorkee have been found to be Corona positive. After this, the authorities here have declared three buildings on the campus as a containment zone.

Recorded over 1.99 lakh patients in 24 hours, thecorona epidemic has taken a formidable form in the country. In the last 24 hours, 1 lakh 99 thousand 376 new patients have been found. 93,418 recovered and 1,037 died. The new case figure has more than doubled from the first peak on September 16 last year. At that time, the maximum number of cases was 97,860 in one day. With this, the number of active cases, ie, patients undergoing treatment, has increased to 14 lakh 65 thousand 877. It can cross 15 lakhs because it has been increasing by more than one lakh since last two days.

Corona epidemic statistics in the country

The state recovered 4,517 patients on Wednesday. There have also been 67 deaths during this period. The total cases in the state have reached close to seven and a half lakhs. 9,376 people have lost their lives due to this epidemic. There are 1.11 lakh active cases in the state. More than 83 lakh people have got vaccinated here. Delhi has also recorded the highest number of 17,282 cases in a single day so far. 104 patients died here.

There is also a shortage of beds, ventilators in Uttar Pradesh:Beds, oxygen and ventilators are facing a crisis in UP hospitals. There has been a shortage of Remadecivir injections throughout the state. Chief Minister Yogi Adityanath has asked Ahmedabad's Gujarat to order 25 thousand doses of Remedisvir injection. He has ordered the authorities to supply the injection with immediate effect. Meanwhile, state Chief Minister Yogi Adityanath and former Chief Minister Akhilesh Yadav have also been found to be corona infected. Both have started treatment in home isolation. 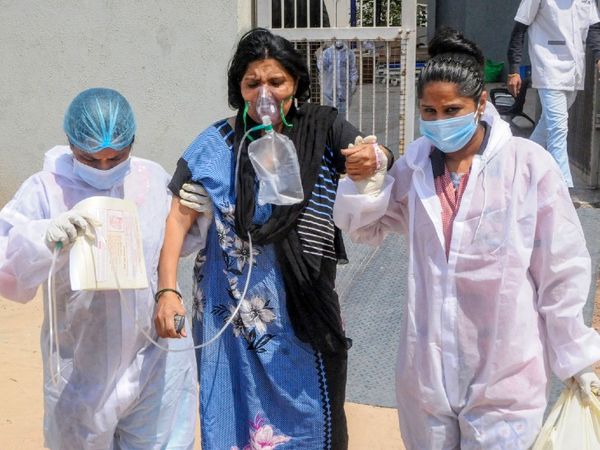 Photo is of Ahmedabad city of Gujarat. Here, a stable patient in Kovid Hospital is shifted from ICU to another ward so that other serious patient can get beds in ICU. There is a crisis of ICU, oxygen and ventilators in hospitals all over Gujarat. 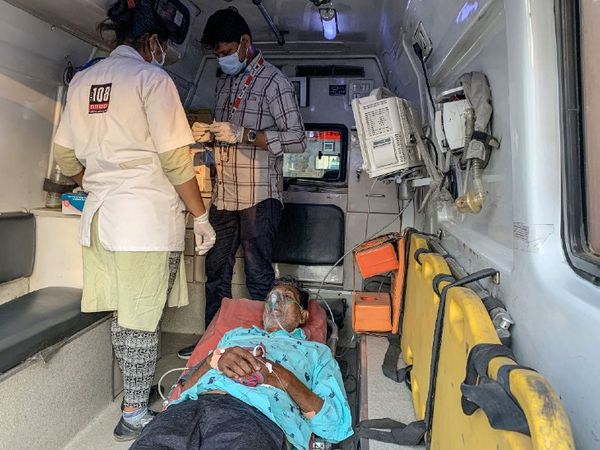 Photo is of Ahmedabad city of Gujarat. Due to lack of beds in hospitals here, treatment of corona patients has started in the ambulance itself.

Most of the major states are ...

4. In Chhattisgarh state, 14,250 people were found corona infected on Wednesday. During this period 4,633 people recovered and 120 died. So far, 4.86 lakh people have been infected in the state. 1.18 lakh patients are undergoing treatment.