Actor Arjun Kapoor has started shooting for the film Ek Villain Returns with Tara Sutaria. The film is currently being shot in Goa.

Tara Sutaria and Arjun Kapoor shared a photo of the first day's shoot of Ek Villain Returns. The shooting of the film has started in Goa. Directed by Mohit Suri, the film stars Arjun Kapoor, Tara Sutaria, John Abraham, and Disha Patni in the lead roles. The fans of the actors are quite excited about the film. On Saturday, Arjun and Tara began shooting Second Part in Goa and shared photos of it on social media. The shooting of the film started in Mumbai this year with John Abraham and Disha Patani and both were seen several times in Mumbai while they were filming some scenes of the film on the street.

Now, Arjun and Tara also have their share in GoaHas started shooting for the film and has shared glimpses of the first day of his shoot from the set. On her Instagram story, Tara shared a photo, where she starts shooting with Arjun, giving a glimpse of the film's clapperboard. He has also tagged director Mohit Suri along with actor Arjun. 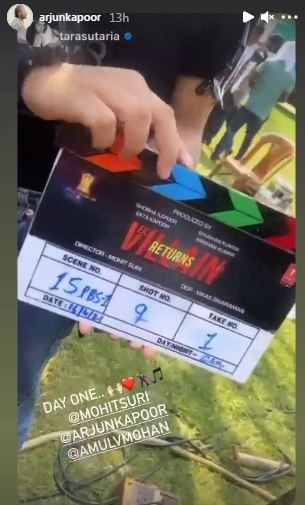 The same has been written on Arjun's Instagram Story. Arjun has also shared a photo on his Instagram Story from the set, where we can see yellow balloons with smiling face shape. 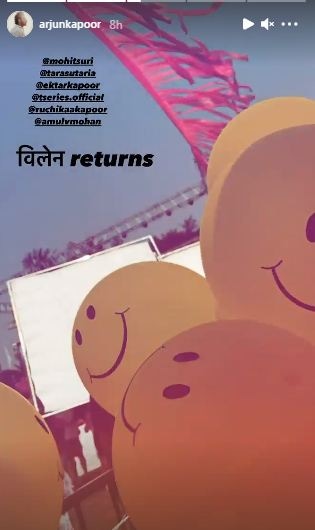 The film's logo is also a smiling yellow face and so with the click of balloons, Arjun shows the fans how he and Tara are starting to work on this thriller film. Sharing the photo, he wrote, 'Villain Returns.' The film is a sequel to the 2014 thriller, starring Siddharth Malhotra, Shraddha Kapoor and Ritesh Deshmukh. The first part of the film was a blockbuster hit. Now the fans are very excited to get a new cast with the sequel. John, Disha, Tara and Arjun are actors who have been cast in the sequel's lead role and Mohit Suri is the director. It is being co-produced by Ekta Kapoor and Bhushan Kumar. The film will be released on 11 February 2022.

Jasmine Bhasin shared a romantic photo of candle light dinner with Ali Goni, Fan said - when is the wedding?