About 32 million voters will decide the fate of 3,54,999 candidates in the second phase of voting. During this time, voting is being done for 2,23,118 posts in the state.

The second phase of voting has started to form the village government in Uttar Pradesh. Teams of the State Election Commission, Panchayati Raj Department, Uttar Pradesh Government, and security forces are ready for the polling process which runs from seven in the morning to six in the morning. Voting is going on in 20 districts including Lucknow on Monday. About 32 million voters will decide the fate of 3,54,999 candidates in the second phase of voting. During this time, voting is being done for 2,23,118 posts in the state.

In the second phase of the three-tier panchayat elections in Uttar Pradesh, votes are being cast in 20 districts including Lucknow and Varanasi on Monday. Voting has started for 2,23,118 posts of village head in addition to district, region and gram panchayat members. Security has been tightened in the second round due to the ballot box being snatched at several places during the first phase of polling and violence taking place. Around 32 million voters will decide the fate of 3,54,999 candidates. Votes will be cast from seven to six in the morning on Monday, amid the rising outbreak of Corona infection and scorching heat.

The Yadav family voting in Saifai of Etawah, former MP Dharmendra and Shivpal son Aditya cast her vote:  vote in Etawah to the Yadav family, who ruled for a long time in Uttar Pradesh is concerned nose. On Monday, former MP from Badaun Dharmendra Yadav, his father Abhay Ram Singh Yadav and son of Shivpal Singh Yadav, the National General Secretary of the Progressive Samajwadi Party, also voted in Saifai here. 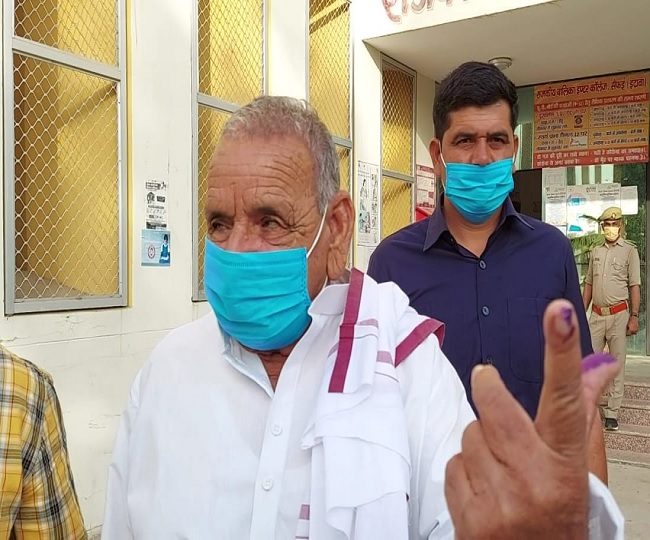 After the vote, Dharmendra Yadav said that Etawah, Mainpuri, Kannauj, wherever the candidates supported by Samajwadi Party are contesting the elections, they will all win. In Saifai, only the SP-backed candidate will win. Due to Covid, Netaji Mulayam Singh Yadav and former Chief Minister and SP President Akhilesh Yadav Saifai will not be able to vote. Akhilesh Yadav is fine now and he will soon be among us all. Progressive Samajwadi Party national general secretary Aditya alias Ankur Yadav along with wife Rajalakshmi voted in Saifai. 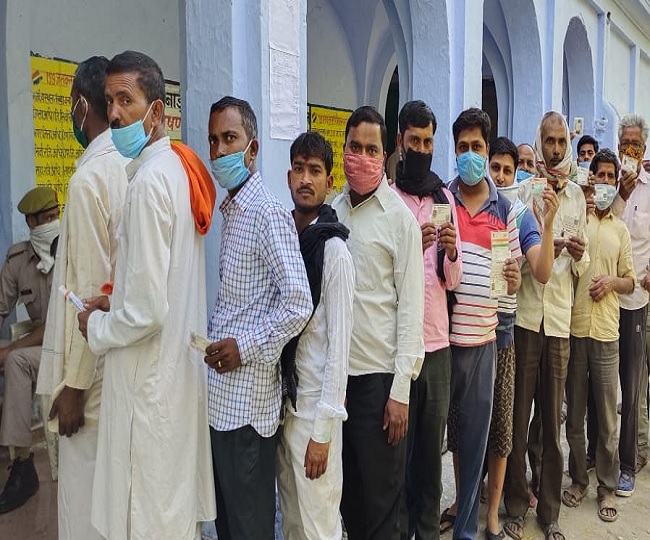 Voting in gram panchayats of Lucknow: Voting is going on  today in 494 gram panchayats in the capital amid the threat of corona infection. Over one and a half thousand voters will vote at about one and a half thousand polling booths. During the voting, the Covid Protocol has made complete security arrangements to be followed. More than twenty thousand employees have been engaged in election work. According to the District Election Officer, a sufficient number of police forces have been deployed to prevent any disturbances in the election. Votes will be cast at all polling stations with the Covid protocol. According to Additional District Magistrate Finance and Revenue Bipin Kumar Mishra, the infected voters will vote in the last hour on the day of the election. During this period, all the arrangements will be made available to the Presiding Officers under the Covid Protocol.

12.20 lakh voters at 2085 booths in Mainpuri : Voting for the posts of district, region and gram panchayat in Mainpuri as well as village head has started from 7 am on Monday morning. There is a great enthusiasm among the voters to vote. Voters reached most of the booths before the scheduled time. Polling will be held at 2085 booths in the district till 6 pm. A total of 12.20 lakh voters will exercise their franchise. Tight security arrangements have been made outside all the booths. Voters are being allowed to enter the booth only after the line is in place. DM Mahendra Bahadur Singh and SP Avinash Pandey and CDO Isha Priya inspected the various booths, while Observer Anil Kumar Yadav reviewed the arrangements at several booths, asking for improvements on finding deficiencies.

Voting amidst tight security in Amroha:Voting is going on in Amroha district amid tight security. Adequate armed police force has been deployed to make the voting peaceful and fair. In addition to police personnel, soldiers of PAC, PRD, Home Guards have also been deployed. Voting began at 7 am, which will run till 6 in the evening. Elections are being held for a total of 597 Gram Pradhan and 683 Kshetra Panchayats and 27 Zilla Panchayat members in the district. 10,38,635 voters will use the vote in the panchayat elections. The administration has created 829 polling booths, which have 1734 booths. Of these, 274 polling stations are kept in the general category, while 163 sensitive, 344 Highly Sensitive and 192 Highly Sensitive Plus booths have been set up. 7341 employees have been engaged to conduct the voting. With the commencement of polling, District Officer Umesh Mishra and SP Suniti went out on a tour of polling stations. Sector and zonal magistrates are posted in the control room for redressal of grievances. 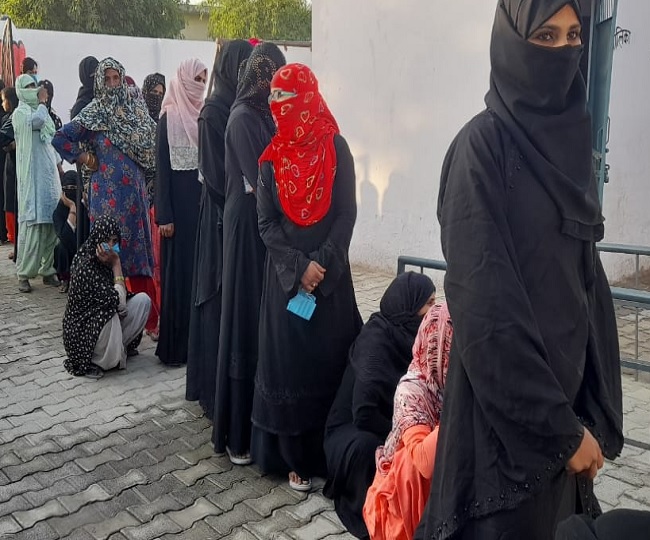 Voting for 1165 seats in Lakhimpur Kheri: In the second phase of the three-tier panchayat election, voting is also going on in the Lakhimpur Kheri district on Monday. A total of 1165 seats will be contested for the post of Graha Gram Panchayat here. 2776 636 voters of the district will elect their village head. In addition, 72 district panchayat members and 1804 area panchayat members will also be elected on Monday. In the Kheri district, 8000 candidates are in the fray in relation to the post of 1165 village heads, while 999 candidates are tapping for the seats of 72 district panchayat members. Similarly, 13548 people are contesting against 1804 Kshetra Panchayat members. A total of 4495 polling places have been set up to vote for 1165 gram panchayat seats in the district. To control them, 8 Star Zonal Magistrates, 15 Zonal Magistrates 163 Sector Magistrates are deployed.

71 percent polling in the first phase: Even in the Corona transition period, on April 15, 71 percent polling was held in the first phase. Voting started at seven in the morning and went till ten in the night. The third phase of polling in the state will be held on April 25 and the fourth phase will be held on April 29. The results will be out on May 2. The Allahabad High Court has directed the government to complete the election process by May 25. In compliance with the same, voting is being held from April 15.

Security system and strict: Taking a lesson from the incident that took place during the first phase of panchayat elections, security will be tightened during the second phase of polling in 20 districts on Monday. Activities ranging from candidates to supporters are being closely monitored. ADG Law and Order Prashant Kumar said that police personnel have been deployed for the second phase of polling. Strict instructions have been given to strictly follow the guidelines of Covid-19. During the polling on Monday, there will be very tight security arrangements in 20 districts including Lucknow, Muzaffarnagar, Baghpat, Bijnor, Kannauj, Etawah. Polling will be held at 52595 polling places in 20929 polling stations in these districts. In the polling districts, 694 inspectors, 8428 sub-inspectors, 16214 chief constables, 66444 home guards, 2605 PRD jawans, 9712 recruitment constables, 57 companies and one platoon PAC and ten company Central Armed Police Forces will be ready. 52595 polling parties will be responsible for conducting the second phase elections. Strict instructions have been given to policemen on election duty to use masks, gloves, sanitizers.

State Election Commissioner Manoj Kumar said that polling parties have reached polling districts. Corona rescue rules will be strictly followed at polling stations. No one will be allowed to enter the polling stations without a mask. 23 senior officials have been appointed as observers to organize the voting process. He informed that the infected voters will be given the opportunity to cast the vote later by wearing PPE kit. All the candidates have been instructed to strictly follow the Covid protocol. All the voters who reached the booth by six in the evening will be able to vote.