Singapore came forward to help India amid the lack of oxygen cylinders in the country.

Operation of IAF amid shortage of oxygen

The second wave of the coronavirus epidemic has caused havoc. The army has now taken a stand amidst a fierce competition for oxygen. Indian Air Force cargo carrier C-17 aircraft have airlifted 6 cryogenic oxygen cylinder containers from Dubai and brought them to Panagarh air base. Apart from this, another cargo aircraft C-17 aircraft has been airlifted 3 oxygen containers from Singapore and brought to Panagarh air base. 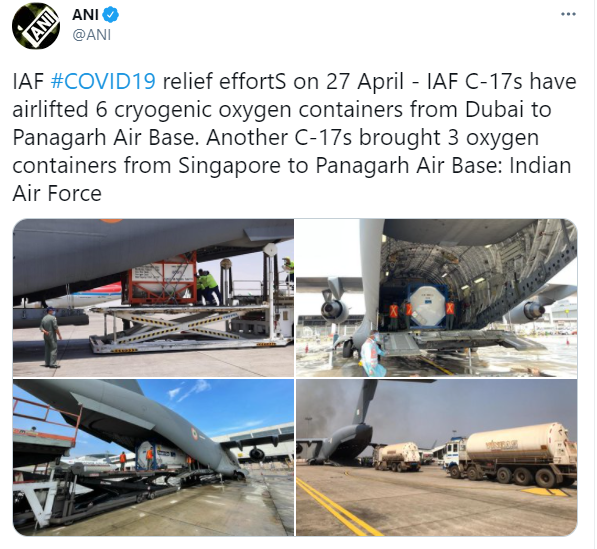 There is a big news of relief for Madhya Pradesh, which is facing oxygen crisis, that the first Oxygen Express ([train)] has left from Bokaro ([Jharkhand)] carrying 63.78 tonnes of oxygen in six tankers. Two liquid oxygen tankers will go to Jabalpur and four to Bhopal. For this, Indian Railways has made special arrangements for Green Corridor. The Bhopal Railway Division has arranged for the landing of these tankers at Mandideep. These tankers will go for loading ([filling)] by rail route after emptying.

President, Prime Minister Oli could not get majority to form new government in Nepal

International      1 day ago
Other News

Jobs and Recruitment      39 minutes ago