Even in the midst of the rising outbreak of Coronavirus infection, there is no shortage of enthusiasm among those who choose the village government in Uttar Pradesh. Polling for the fourth and final phase has started at seven in the morning. Polling parties and security personnel along with voters are ready to vote in 17 districts till 6 o'clock in the evening.

The first phase of polling in the state was held on April 15. In which 18 percent voting was done in 18 districts. After this, the voting percentage went on increasing. On April 19, 73 percent voting was held in 20 districts, and on April 26, 73.50 percent voting was done in 20 districts. Even today the voters of 17 districts are enthusiastic and their effort is to break the record of the last three phases. In the last three phases, there was looting and firing along with looting of ballot papers, water, and ink. In view of all these, the security personnel is very alert today. Polling has started in Bulandshahar, Hapur, Sambhal, Shahjahanpur, Aligarh, Mathura, Farrukhabad, Banda, Kaushambi, Sitapur, Ambedkaranagar, Bahraich, Basti, Kushinagar, Ghazipur, Sonbhadra, and Mau districts in the state today.

Uproar of villagers on the information of ballot theft from polling booths: Around 500 ballot papers of the post of the head have been stolen at polling booth number 116 of Jaitpur, gram panchayat of Badhpur block in Farrukhabad. It is alleged that he went home at night after the health of Presiding Officer Robin Mitchell deteriorated. The villagers created an uproar when they came to know about it in the morning. Polling was stopped there. Seeing the commotion, the polling officer informed the sector and zonal magistrate about the ballot being stolen from the polling booth. 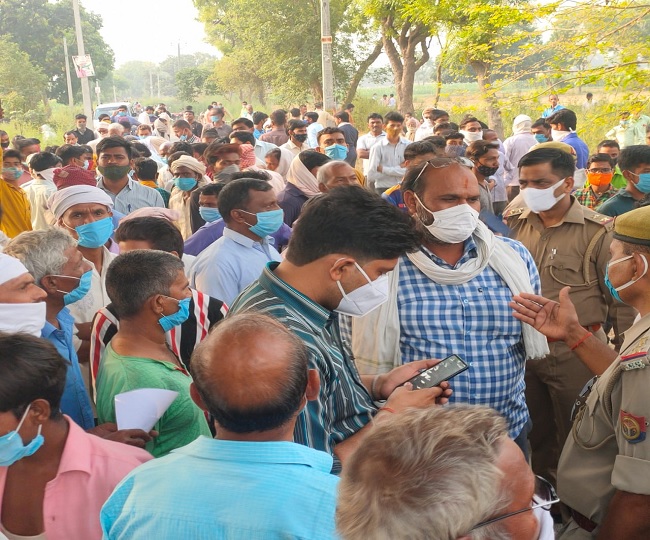 The two officials informed DM Manvendra Singh regarding the incident. Subsequently, on the orders of DM, SDM Sunil Kumar and CO Sohrab Alam arrived with the police force. The ruckus of villagers continues at the scene. As soon as the incident was known, District Magistrate Manvendra Singh and Superintendent of Police Ashok Kumar Meena have also reached the spot. These people are engaged in convincing the villagers.

90-year-old Savitri arrives in Farrukhabad to cast vote on grandson's lap: Voters for the panchayat elections were seen in the voters in Khimsapur, the gram panchayat in Mohammadabad area of ​​the development block of Farrukhabad. A large number of voters reached the booth since morning. 90-year-old Savitri Devi of the village is helpless to walk.

If she could not go to the booth herself, she resorted to her grandson Upendra Singh. Upendra reached the booth to pick up Savitri Devi in ​​her lap and cast her vote. There is enthusiasm to vote in the panchayat elections in Farrukhabad. A large number of voters reached some booths in the morning before the gate of the polling station opened. 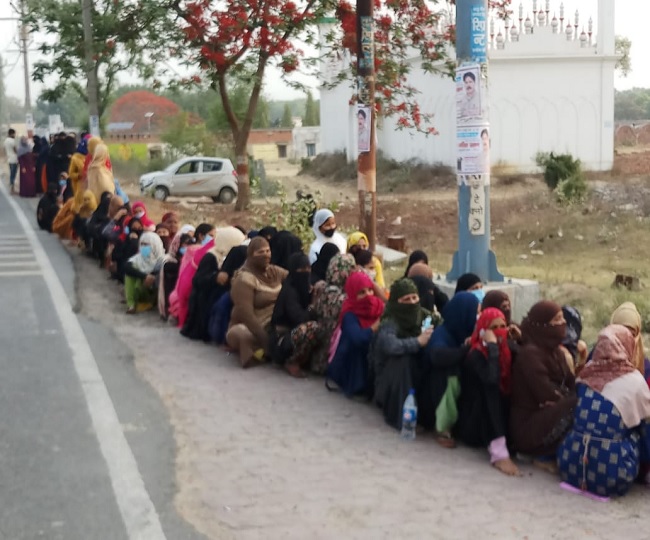 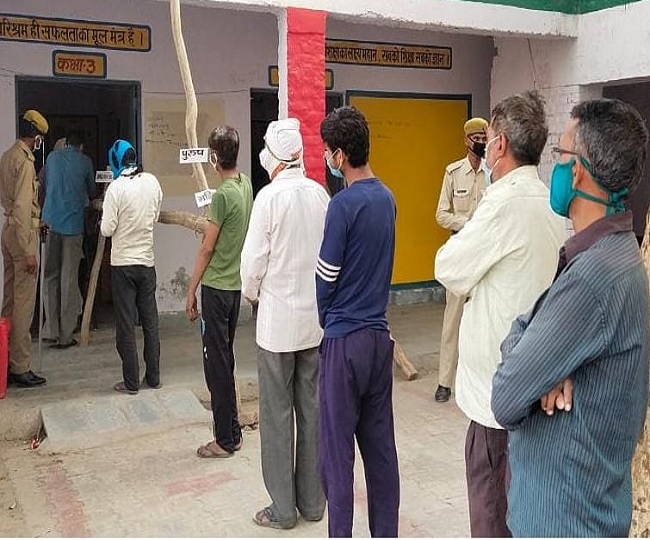 Tight security arrangements in Bahraich: For the fourth phase, voting started in Bahraich district at seven in the morning. Most booths have long queues in the morning. Voters are coming to the booths here only by putting on masks. Even then, the physical distance between the growing corona transition is being wired. There is no arrangement for sanitization and mask. Elections are being held on the posts of head of 1045 gram panchayats, 63 Zilla panchayat members, 1580 kshetra panchayat members, and 13703-gram panchayat members in the district. 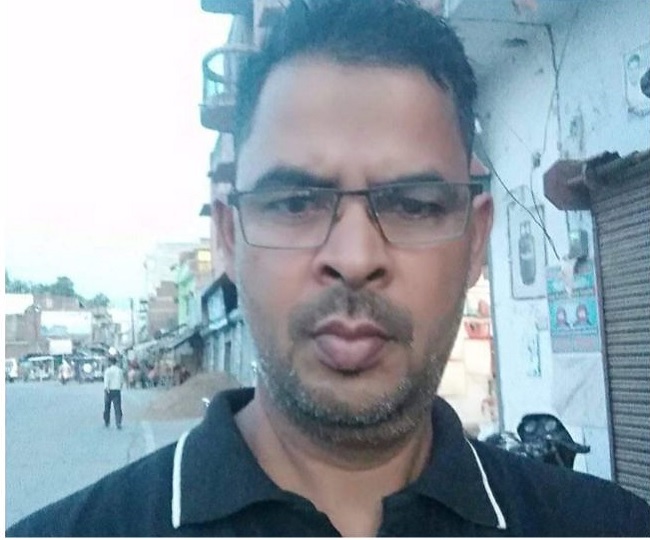 Voters are following the Covid guideline at some polling stations. At the same time, voters' line at some polling stations could not see two yards. 30.65 lakh voters of the panchayats of the district will elect the village government. 79 district panchayat members and 1594 heads will be elected. Elections were to be held on 1596 head of the district. The election for the post of the head of these gram sabhas has been postponed after the demise of the candidate for the post of Prime Minister at Gram Sabha Behat Gaur of Kasamanda's Gram Sabha, Puranpur and Pisawan blocks. The Prime Ministerial candidate had also died in Reusa and Biswan blocks, the election postponement order was not issued by the ROs of these blocks.

5.5 lakh candidates decided: In the last phase of panchayat elections in the state, more than 2.9 crore voters in 17 districts will become the fate of five and a half lakh candidates. On Thursday, 2,98,21,443 voters will decide the fate of 5,58,205 candidates for various posts in the fourth and final phase of the three-tier panchayat election. Votes will be cast at a total of 48,460 polling booths in the 17 districts of the state till 6 pm. In view of the increasing outbreak of Corona infection, strict instructions are issued to strictly follow the rescue measures. 243708 officers and employees have been deployed to conduct the elections. This, in addition to 395 Zonal Magistrates and 2665 Sector Magistrates, 16 Election Officers and 96 Assistant Election Officers for the posts of District Panchayat member, 177 Election Officers and 1599 Assistant Election Officers have been appointed for the posts of Area Panchayat members. 208 election officers and 2136 assistant election officers are posted for village head posts.

Sanitation at polling stations:  Cleanliness and sanitization work done at 19035 polling booths. Director Panchayati Raj Kinjal Singh informed that the duty of Anganwadi workers, Asha Bahu and cleaning workers have also been placed at polling booths to ensure full compliance of the Corona Guide Line. Adequate sanitizers have been provided at booths to sanitize the hands of voters. He informed that 9,924 cleaning workers and about 31,000 Anganwadi and Asha Bahu are employed in 14,120-gram panchayats.

Pulse oximeter and thermometer also: Director told that Polling Booths will have members of Monitoring Committee, Anganwadi Worker and Asha Bahu with Pulse Oximeter and Thermometer. Monitor voters' temperature and oxygen level before voting. Voting will be allowed only after sanitizing.

Jobs and Recruitment      46 minutes ago