US President Joe Biden is considering appointing Eric Garcetti, the mayor of Los Angeles, as the new ambassador to India.

There is big news coming out of America at this time. Los Angeles Mayor Eric Garcetti may be appointed as the US Ambassador to India. US President Joe Biden is considering the decision. The news agency ANI has given this information to the US media. According to US media, US President Joe Biden is considering appointing Los Angeles Mayor Eric Garcetti as the new ambassador to India. 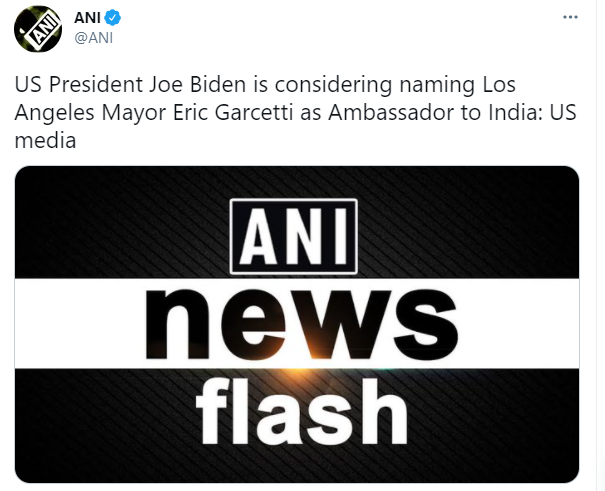 US President Joe Biden has decided to send Daniel Smith to India as his interim ambassador in the midst of the humanitarian crisis created by the Covid-19 infection in India, to enhance cooperation between the two countries. The US State Department said that Ambassador Daniel Smith, director of the Foreign Service Institute, who recently served as caretaker foreign minister and caretaker deputy foreign minister, will leave for New Delhi to serve as interim chief of the US embassy in India.

The post of US Ambassador to India has been lying vacant since January 20. Biden was sworn in as the 46th president on 20 January. Appointment to this position requires Senate confirmation. The confirmation process takes several months after being nominated for the post. In the midst of the deepening humanitarian crisis in India, the Biden administration could not keep the post of its embassy chief in New Delhi vacant. State Department spokesman Ned Price said Smith's appointment underscores America's strong commitment to partnership with the Indian government and the Indian people.

Biden vs Putin: Biden had called Putin a 'killer', know how he was soft before meeting him in Geneva, said this...

One died in floods in central Nepal, many feared missing

Israel carried out air strikes on Gaza, the army confirmed that the first terrorists caused damage with balloon bombs

India and Israel: Israel will forge an advanced strategic relationship with India, Bennett announced the very next day after becoming PM

International      2 days ago
Other News