Big political alliance in Punjab, SAD and BSP join hands after 25 years, know which 20 seats they will fight

In view of the assembly elections to be held in Punjab in 2022, there has been a big political alliance.

In view of the assembly elections to be held in Punjab in 2022, new political equations and alliances have started forming. Now the parties of former Chief Minister of Uttar Pradesh Mayawati and former Chief Minister of Punjab Parkash Singh Badal and former Deputy Chief Minister Sukhbir Singh Badal have come closer. SAD and BJP forged an alliance today. SAD chief Sukhbir Singh Badal and BSP leader Satish Mishra made this announcement here. Both the parties will fight the Punjab Assembly elections together. The Shiromani Akali Dal (SAD) has come together after 25 years from the Bahujan Samaj Party (BSP) after breaking an alliance with the Bharatiya Janata Party over three agricultural laws.

Talking to reporters here, Sukhbir Singh Badal and Satish Mishra announced about the alliance. Sukhbir said that out of the total 117 seats in the Punjab Assembly elections, BSP will contest 20 and SAD will contest 97 seats. On this occasion, BSP leader and MP Satish Mishra said that it is a historic day in the politics of Punjab, when BSP and SAD have formed an alliance. Now it has become the biggest political force of Punjab. In 1986, when both the parties contested the Lok Sabha elections together, they won 11 out of 13 seats in the state.

BSP will contest assembly elections on these 20 seats

Sukhbir Badal said that the alliance formed by his father Parkash Singh Badal 25 years ago with Babu Kansi Ram and he won 11 out of 13 parliamentary seats in the state, he will now take it forward. He said the SAD has a history that it never lets go of the arm it holds. He said that Parkash Singh Badal became the Chief Minister five times. It is because of his thinking that people believe in him. It is his thinking that there should be peace and harmony in Punjab.

He said that he launched many schemes to solve the problems of Dalits and farmers, but the present Captain Government could not take them forward. He prepared the plan to spend 300 crores on Lord Valmiki temple in Amritsar. Opened the village Khulargarh of Guru Ravidas Ji, the temple has been closed since the time the Captain's government came. Sukhbir Badal announced that state level and district level committees would be constituted for coordination between the two parties.

BSP leader Satish Mishra said that Mayawati had to come first to announce this alliance, but she did not come due to the intention of not gathering much crowd due to Corona. He said that the thinking of Akali Dal and BSP is the same. The stand taken by the Akali Dal regarding the three agricultural laws is the same as that of the BSP. Mayawati and she have openly opposed it in the Rajya Sabha. Not only this, Harsimrat Badal has also left his ministerial post in support of the farmers. He said that even in Uttar Pradesh, we have told the farmers that these laws will not be allowed to be implemented if our government comes.

Satish Mishra also attacked the Aam Aadmi Party. He said that earlier he supported all the three agricultural laws but when he saw the farmers' movement, he reversed it. There is a need to avoid such people. 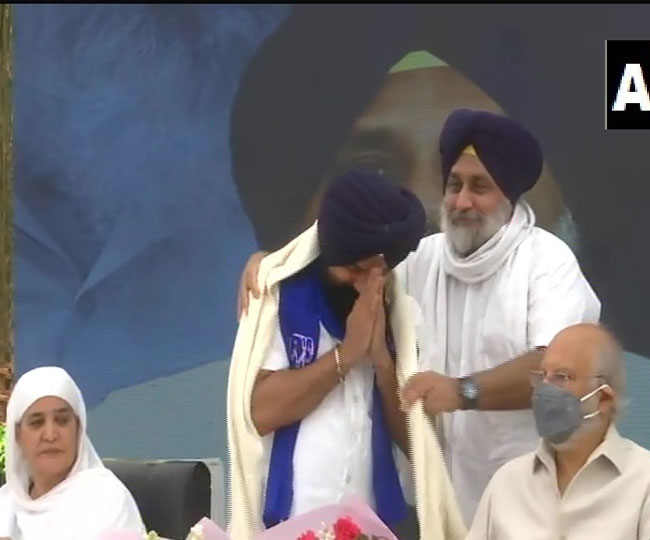 Senior BSP leader Satish Mishra had reached Chandigarh on Friday for this agreement. There was also a long meeting between Akali Dal chief Sukhbir Badal and them in which the seats were discussed. It is said that the seats could not be reached. Shiromani Akali Dal was ready to give 18 seats to BSP in the state and BSP's demand was 23 seats. In these, the party is eyeing the Doaba region as well as the seats of Ferozepur. During the 2017 assembly elections, the BSP got good votes in some seats in Doaba, about which the party is excited. It is worth mentioning that earlier the BJP had only 23 seats in the alliance. Later, there was an agreement regarding seats between the two parties and BSP has got 20 seats and SAD has 97 seats.

Earlier in the 1996 Lok Sabha elections, Shiromani Akali Dal had made an alliance with Bahujan Samaj Party in which BSP got success in three seats Hoshiarpur, Phillaur and Ferozepur, but by the time of 1997 assembly elections this alliance broke down and Akali Dal formed a new alliance with the Bharatiya Janata Party.

Interestingly, veteran Akali leader and then SGPC chief Gurcharan Singh Tohra was against the nexus of Akali Dal and BJP but Parkash Singh Badal did not heed Tohra's advice in search of a strong ally at the Centre. There was of the view that we should make a compromise with the BSP as the Sikhs have an old religious and social understanding with the Dalits.

Now that only eight months are left for the assembly elections in Punjab. In such a situation, due to the new equations being created, this time the election will be very interesting and will revolve around Dalit politics. Earlier, the Bharatiya Janata Party has also announced to bring a Dalit face as Chief Minister in Punjab.

Before the party could project someone as a Dalit face, its old ally SAD announced that it would make a Dalit deputy chief minister in the 2022 elections. On the other hand, the Aam Aadmi Party also put forward a Dalit leader in the form of Harpal Cheema by replacing Sukhpal Singh Khaira to cash in on the Dalit vote in 2018 and made him the leader of the opposition. Congress is also trying to cash in on the Dalit vote bank for the last several days.

The BSP got only 1.50 per cent vote share in 2017 which went up to 3.52 per cent in the 2019 parliamentary elections. This was a big achievement for the party, on which other parties were also forced to think. BSP candidates performed better than expected in several assembly seats in Doaba.