Several senior BJP leaders were also present along with Amit Shah on this occasion. 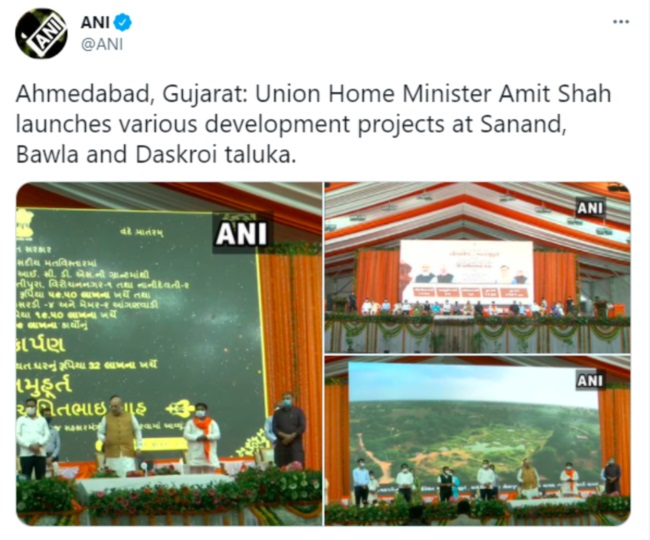 On Monday, Amit Shah will launch a 12-acre lake beautification plan in Gandhinagar's Nandipur village and inaugurate the National Forensic Science University's Narcotics and Psychiatric Substances Detection Center. It is here that we will participate in a conference on women's safety. Earlier on Monday morning, Amit Shah along with his family will attend Mangala Aarti at Lord Jagannath Temple. Here, Gujarat's Minister of State for Home Pradeep Singh Jadeja, after taking stock of the security of the route of the Rath Yatra, said that following the guidelines of Corona, the Rath Yatra will be taken out in strict security arrangements. The Rath Yatra will take place under a three-tier security cordon. Visitors have been appealed to have live darshan on TV. CCTVs will be installed on the route of Rath Yatra and continuous monitoring will be done from local police stations. The journey will leave only from 7 am to 12 noon, during which seven DCPs, 14 ACPs, 44 Police Inspectors, 98 PSI, SRP, CRPF and thousands of Gujarat Police personnel will be deployed in security. Along with the Rath Yatra, 10 teams of Bomb Detection and Disposal Squad, Chetak Commandos, Dog Squad will be deployed and 15 drones will monitor the Rath Yatra.

Here, Gujarat Assembly Speaker Rajendra Trivedi, BJP State President CR Patil and Minister of State for Home Pradeep Singh Jadeja attended the Netotsav ceremony of Lord Jagannath. These leaders hoisted the flag in the temple in the morning and participated in the Maha Aarti. The Netrosav was organized on Saturday morning before the 144th Rath Yatra of Lord Jagannath, the deity of Ahmedabad, on 12th July. Gujarat Assembly Speaker Rajendra Trivedi, State BJP President CR Patil, Minister of State for Home Pradeep Singh Jadeja, etc. attended it. Lord Jagannath, sister Subhadra and brother Balram reached Nijmandir in Jamalpur from Saraspur Nanihal on Saturday morning. Here his eyes were blindfolded, this is called Netrosav Vidhi. After this, flag hoisting and Maha Aarti were organized, in which the Speaker of the Assembly, Ahmedabad Mayor Kirit Bhai Parmar, State President of BJP.