Jagannath Rath Yatra: Chaturdha Deities were seated on the chariot, Mahaprabhu's Rath Yatra will be held amidst tight security

For the Rath Yatra of Mahaprabhu Jagannath ji in Puri, customs and policies are being completed since morning.

The world-famous Rath Yatra of Mahaprabhu is being taken out amidst tight security in Jagannath Dham Puri without devotees. Mahaprabhu will go on a nine-day journey along with his brother and sister to Gundicha Yatra on the day of Ashadh Shukla Dwitiya Tithi. According to the information, the chariot was established after the completion of Sakal Dhoop, Khichdi Bhog policy before the scheduled time. After this, the procession of Shri Deities has started. First of all, chakraraj Sudarshan's dhaadi was sold. After this, brother Balabhadra and sister Subhadra were brought to Pahandi Bije and made to sit on the chariot. At last the Pahandi Bija of Mahaprabhu Jagannath ji has started.

To see this unique form of Mahaprabhu, where lakhs of devotees used to visit Jagannath Dham every year, like last year, this year also Mahaprabhu's Rath Yatra is being taken out without devotees. People have seen the Nath of Jagat through television sitting in their homes. Due to the Corona epidemic, strict security arrangements have been made by the police administration due to the devotees less Rath Yatra being taken out. The city has been divided into 12 zones so that the yatra is completed in a disciplined manner. 65 platoon police force has been deployed. Special security force personnel have been deployed atop houses on either side of the city's main entrance, Burdand.

Curfew has been imposed in the city from 8 pm on Sunday, which will continue till 8 pm on Tuesday. The people of the houses living on the banks of Bardand have also been banned from having the darshan of Mahaprabhu coming in the Rath Yatra. In such a situation, people are seeing this unique presentation of Mahaprabhu by staying in their homes.

Policies have started from dawn

The Rath Yatra of Mahaprabhu Jagannath ji will be taken out in Puri, Odisha from 3 pm, but the policies for the Rath Yatra have started from dawn. The door of the temple was opened at 4:30 in the morning and then Mangal Aarti was performed. After the completion of Mangal Aarti, a holiday policy, followed by doorkeeper worship, sun worship followed by Khichdi Bhog was offered to the Lord in the hot sun. After the completion of the chariot prestige policy by chanting, 24 priests will perform a havan for the chariot consecration at the Chanani Mandap located in the Jagannath temple. 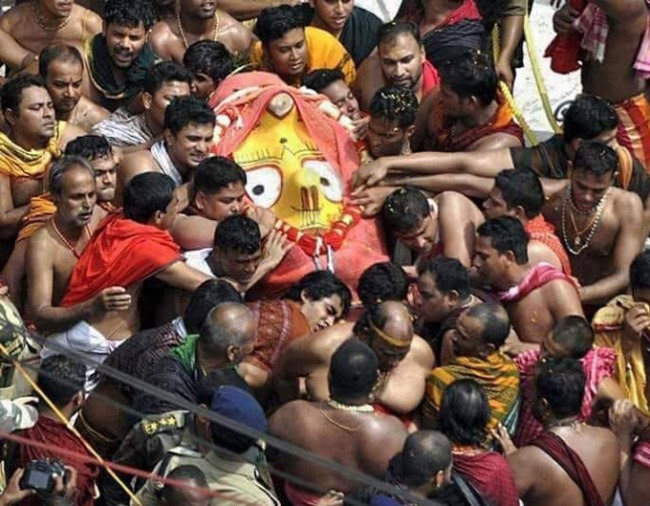 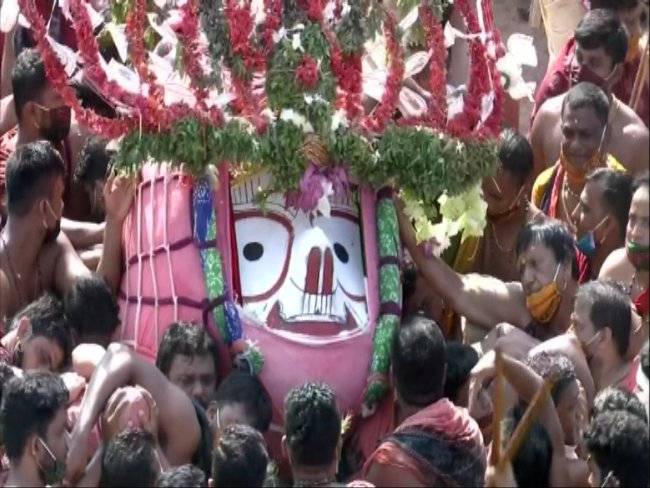 Mangala Aarti was performed at 4.30 am in morning. The time of Rath Pratishtha is 8 o'clock and after that at 8.30 o'clock Pahandi Bijhi. Pahandi Bijay will end at 11.30 am. After this, Shankaracharya will have the holy darshan of the four deities sitting on the chariot. Gajapati Maharaj Divya Singhdev will perform the rituals of Chherapahanra on the chariot between 12:45 am to 2 pm. The chariot pulling process will start in Puri from 3 pm onwards. Explain that 500 servants will be present to pull each chariot, the three chariots will be pulled by a total of 1500 servants.