In the case of taking BJP leaders hostage in Rajpura, the police have registered a case against 150 farmers including three known people.

During the BJP meeting in Rajpura, the farmers' protest took a violent turn late in the night. The farmers took BJP's District Secretary Dr. Ajay Chaudhary, other leaders and their families hostage in the house and cut off the electricity of the house. Late night, the High Court had to give orders to free the BJP leaders. After this, the police lathi-charged the farmers and freed the BJP leaders. Meanwhile, the police have registered a case against 150 unidentified protesting farmers, including three known people.

DSP Gurvinder Singh has presented the status report of the case in the High Court today. According to reports, after the meeting of BJP leaders was received, around 100 policemen were immediately deployed. The BJP leaders did not inform the local administration about the meeting and the press conference. Everyone was evacuated safely and a case has been registered on the complaint of BJP leaders.

The argument given by the petitioner side that such incident is happening daily in Punjab. High Court to issue order.

The police have registered a case in connection with the clash that took place after the protest of BJP leaders in Rajpura. The City Police Station of Rajpura has registered this case on the statements of constable Bhupinder Singh, who was injured during the clash. In this case, apart from Manjit Ghumana, Happy Hasanpur and Vivek Zirakpur, 150 unknown people have been included in the list of accused. So far, no accused has been arrested yet. Confirming this, in-charge of CT Rajpura police station Gurpreet Singh said that the condition of Bhupinder Singh is out of danger.

The injured soldier is being treated at Rajindra Hospital, Patiala. The people involved in the case are accused of making the crowd violent during the dharna demonstration. Due to which the government and public property was damaged and constable Bhupinder Singh was attacked fatally while disturbing the government duty. As of now, none of the accused has been arrested. In this case the statements of the BJP leaders held hostage will be recorded. Further action will be taken as per their statements.

BJP came out on the streets of politics

At the same time, politics has heated up in the state regarding this matter. BJP leaders have taken to the streets across the state. BJP leaders also met CM Capt Amarinder Singh today demanding registration of FIR against farmers. The Patiala district administration and police, after a lot of effort, got the farmers' dharna removed at around four in the morning and freed the BJP leaders who were held hostage in the house at five o'clock. During this, BJP leaders remained hostage in the house for about 12 hours. Even though the police tried to free them, but no concrete action has been taken against the farmers who took them hostage. 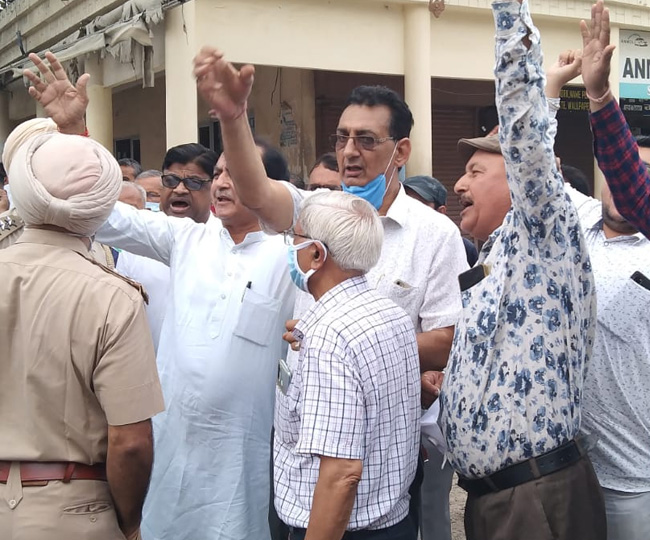 BJP workers protesting against the Rajpura incident in Kapurthala.

After hours in this matter, now a case has been registered against the accused. Earlier, Rajpura DSP Gurvinder Singh said that the farmers involved in the incident are being identified. Only after that any legal action will be taken against the farmers. On the other hand, where the BJP leadership of Rajpura is waiting for the instructions of the party high command to take further action in this matter. 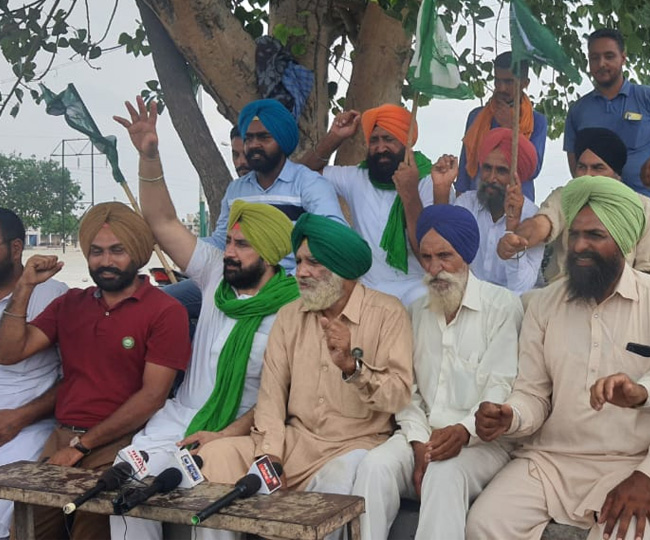 Farmer said - case should be registered against BJP workers

In this case, under the banner of United Kisan Morcha, in the new grain market in Rajpura, the farmers demanded that a police case be registered against BJP leader State Secretary Subhash Sharma and senior BJP leader Bhupesh Agrawal from Patiala. He alleged that when yesterday on Sunday various farmers were protesting against the central government in a peaceful manner. Meanwhile, Bhupesh Agarwal's bodyguard threatened him by showing him a revolver. During this, BJP workers also used abusive language towards the families of the farmers. On this occasion, Farmer Leader Gurdev Singh said that Rajpura Police has sought time for investigation to take legal action against the said BJP leaders, so he is postponing his struggle for the time being. If no action is taken in this regard soon, road will be blocked at various places.

A delegation of the party's Kar Group met CM Captain Amarinder Singh against the captivity of Bharatiya Janata Party leaders in protest against the Rajpura incident. The meeting was attended by party president Ashwini Sharma and other former chiefs and senior leaders. Said that the farmers across the state are opposing the BJP leaders in protest against the three agricultural laws. If BJP leaders go anywhere to hold meetings etc., they are being prevented from doing so there as well as being opposed. Even before the Rajpura incident, BJP leaders have been attacked many times. Apart from party chief Ashwini Sharma, many leaders including MLA Arun Narang, former minister Tekshan Sood, Subhash Sharma have come under the target of farmers. Against this the top leadership of the party also met the Governor.