After the high voltage drama in Punjab Congress, Sonia Gandhi summons Sidhu, a big decision may be taken today

Due to the opposition of Captain Amarinder Singh, an attempt will be made to persuade him today and it will be announced after that.

Before the announcement of Navjot Singh Sidhu as the President of Punjab Congress, high voltage drama is going on in the party and it is continuing since yesterday. Navjot Singh Sidhu will come to Delhi today and will meet the acting President of Congress, Sonia Gandhi. Congress general secretary and party's Punjab in-charge Harish Rawat will also be present with him. It is understood that in view of the ongoing developments in Punjab Congress since yesterday, Sonia Gandhi has called Sidhu.

It is said that after the developments in Punjab Congress since last evening and reports of meetings of the camps of Sidhu and Captain Amarinder Singh, the Congress high command has taken the whole matter seriously. This is the reason why this morning Sidhu has been called to Delhi by Sonia Gandhi. It is believed that after this a big decision can be taken in the case of Punjab Congress. 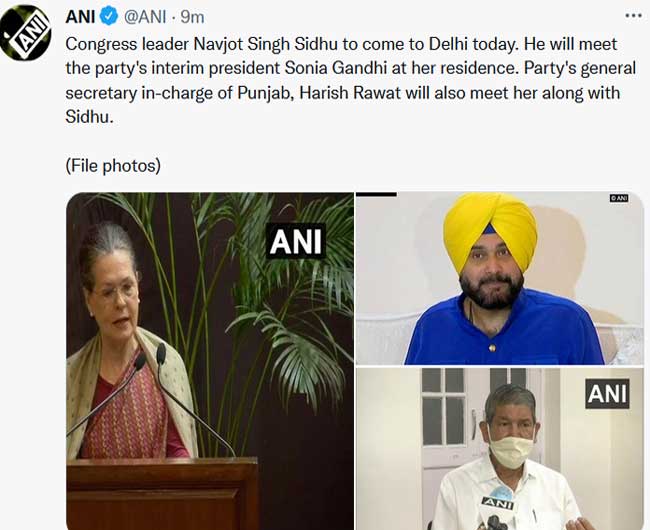 Let us inform that due to the high voltage drama in Punjab Congress, the announcement of Sidhu's coronation was stopped at the last moment. In the whole matter, Punjab Congress in-charge Harish Rawat also came under attack in a way and he had to give clarification in the court of Sonia Gandhi. Now today only Rawat will agree with Captain Amarinder in this matter and after that any time today Sidhu can be announced as Punjab Congress President.

In fact, there was a stir in the Congress yesterday as soon as the curtain was removed from the political formula fixed to end the internal war of Chief Minister Captain Amarinder Singh and Navjot Singh Sidhu in Punjab. On Thursday, Congress' Punjab in-charge Harish Rawat talked about making Sidhu the state president, while many senior leaders including Captain gave a message to party president Sonia Gandhi that this is not the right decision. After this, the politics of pressure and pressure has intensified in both the camps. By night, the camp in Punjab Congress reached its peak. Sidhu and the captain held meetings with ministers and legislators close to them.

In the Congress on Thursday, the whole day was hectic from Delhi to Chandigarh. In the morning, during a conversation in New Delhi, Harish Rawat announced that the struggle of Captain-Sidhu in the politics of the state was almost over. He said that after the discussion between the Chief Minister and the Congress High Command, the way for a solution has been found. On the question related to the proposal to make Sidhu the state president, Rawat said that the formula for reconciliation has been kept around this option. Rawat made it clear in gestures that Sidhu would take over the reins of the state Congress.

He also made it clear that the Captain has been our Chief Minister for the last four and a half years and of course the Congress will contest the 2022 elections under his leadership. He expressed hope that Captain and Sidhu would together lay the foundation stone for the party's victory in the elections.

After this statement of Rawat, there was a stir in the Punjab Congress and there was a sharp reaction from senior leaders like Captain Amarinder and Pratap Singh Bajwa. According to sources, Amarinder Singh raised objections by calling Sonia Gandhi. It is said that apart from Rajya Sabha member Pratap Singh Bajwa, senior leader Kamal Nath and former cabinet minister Ashwani Kumar also raised objections.

After this, Sonia Gandhi summoned the state in-charge Harish Rawat at 10 Janpath and sought clarification on the whole matter. Rawat clarified that he had not talked about making Navjot Sidhu the president. He had said that the decision could be made around this. He did not take Sidhu's name.

Sidhu once again did the politics of pressure and met four ministers and six MLAs in the evening when there was no announcement of being made the president of the party. Sidhu held a meeting at the residence of senior Punjab minister Sukhjinder Singh Randhawa with other ministers of the anti-captain camp, Tript Rajinder Singh Bajwa, Sukhbinder Singh Sarkaria and Charanjit Singh Channi. MLAs Pargat Singh, Kulbir Zeera, Barindermeet Singh Pahra and Kushaldeep Dhillon were also present in this meeting.

Two working presidents will be made by the choice of the captain, there will be a change in the cabinet

Party sources said that keeping in mind the caste and social equations in Punjab, it is almost certain to have two working presidents. To balance the political equation, the high command will also consider the choice of the captain for the acting president. According to party strategists, after the announcement of the change in the organization, Captain Amarinder Singh will reconstitute his cabinet and include some new faces, while some controversial faces will also be discharged.