High Voltage Drama in Punjab Congress: Even Sidhu-Sonia meeting did not solve the problem, now Rawat will come to Chandigarh today

After the high voltage drama in Punjab Congress, Navjot Singh Sidhu and Harish Rawat will hold a meeting with Sonia Gandhi in Delhi.

The high voltage drama is going on to make Navjot Singh Sidhu the President of the Punjab Congress. Sidhu held a meeting with the party's acting national president Sonia Gandhi along with Punjab Congress in-charge Harish Rawat. Along with this, it is said that before the meeting of Sidhu, a letter was given to Sania Gandhi by Chief Minister Captain Amarinder Singh. This has deepened the suspense in the whole matter.

Harish Rawat will come to Chandigarh tomorrow to talk to Captain Amarinder Singh, then Sidhu will be announced

On the other hand, Harish Rawat will come to Chandigarh tomorrow to resolve the dispute. He will meet CM Captain Amarinder Singh and discuss the whole matter. After this, it is expected that the situation will be cleared in the matter of making Sidhu the Punjab Congress President.

On the other hand, Sidhu's supporters in Punjab have started celebrating. His supporters reached outside Sidhu's kothi in Amritsar carrying drums etc., but went back as there was no official announcement. 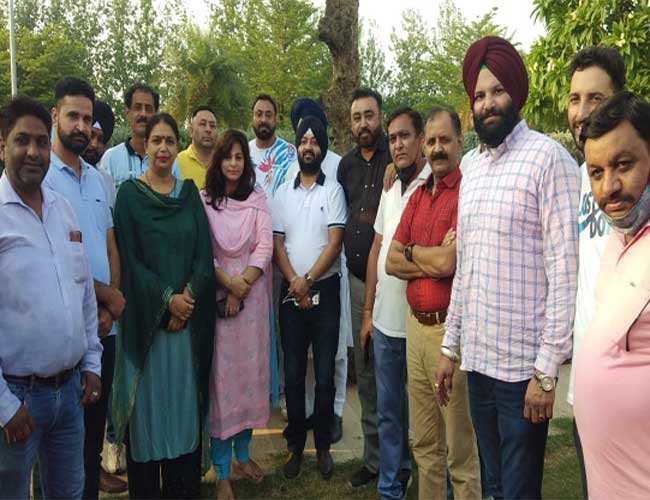 His supporters reached outside Navjat Singh Sidhu's kothi in Amritsar.

Along with this, it is said that in the meeting of Sonia Gandhi of Sidhu and Rawat, a decision has been taken regarding Punjab Congress. On the other hand, a poster war has started between Sidhu and his rival camp in Punjab. In Punjab, including Amritsar and Ludhiana, Sidhu's supporters put up poster-banners. Such posters were torn down in Ludhiana.

Let us inform that yesterday it was discussed that in the midst of making Sidhu the head, the Captain has offered to resign to Sonia Gandhi. However, later the Chief Minister's media advisor Raveen Thukral had categorically denied this. He had tweeted saying that the captain has neither resigned nor offered it.

Speculations have started about Narendra Bhambri carrying Capt Amarinder Singh's letter just before meeting Sidhu. However, those close to the Chief Minister say that Captain Amarinder Singh is a soldier. The soldier does not run away by showing his back. The soldier does not leave the field. Bhambri has talked about meeting Sonia Gandhi but she refused to tell why they met. 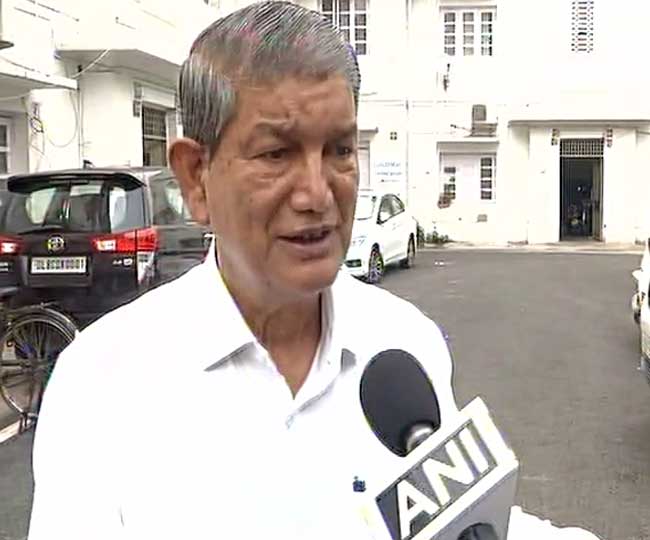 After the meeting with Sania Gandhi, Harish Rawat said in a conversation with the media that I have given my report and opinion to party President Sonia Gandhi on the whole matter. I will soon inform the media about the party's decision in the Punjab Congress case.

On the discussion of Captain Amarinder's displeasure, Rawat said - if there is lack of communication, then we will remove it

Congratulatory posters were also put up for Sidhu in Punjab, another group tore it up in Ludhiana.

On the other hand, supporters of Sidhu in Punjab are putting up banners and posters thanking the Congress leadership for making him the state head. In Amritsar and Ludhiana, posters have been put up in support of Sidhu. However, the incident of tearing them by another group in Ludhiana has also come to the fore. 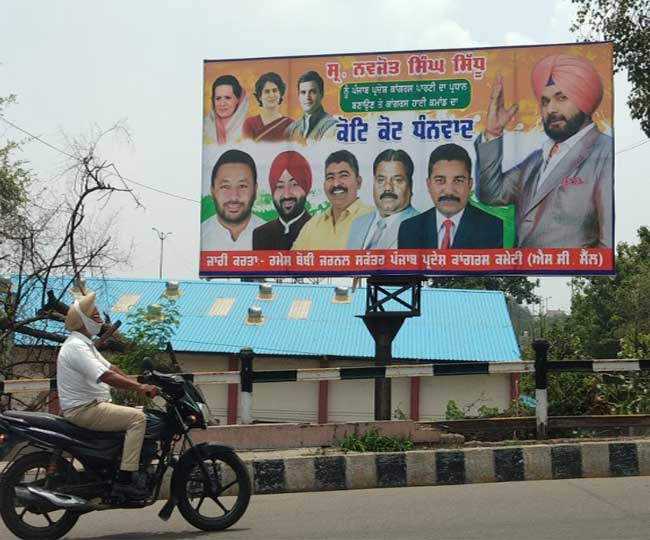 Congratulatory banner for Navjot Singh Sidhu put up in Amritsar.

High voltage drama going on in Punjab Congress since yesterday 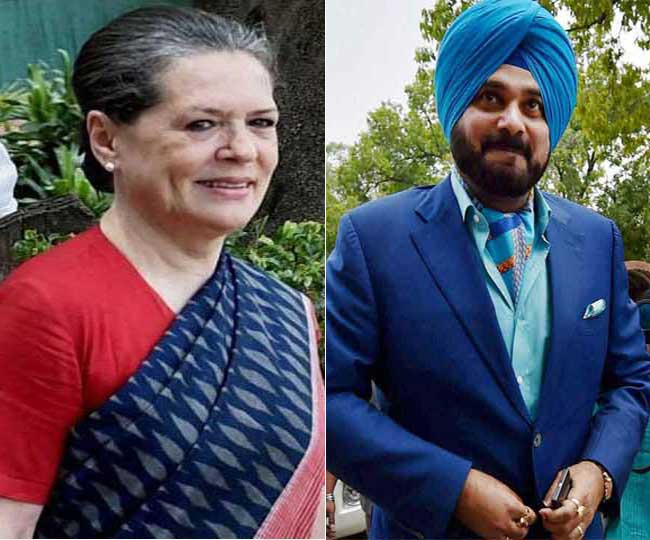 Sonia's meeting with Sidhu and Rawat

It is said that regarding the meeting of Sonia Gandhi and Navjot Singh Sidhu, a section of Punjab Congress is believing that now the state head will be announced. The other section is saying that due to the massive protests, Sonia called Sidhu to find a middle ground. Sidhu left for Delhi from Patiala early in the morning for this meeting.

On the other hand, now the MP and senior Congress leader Manish Tewari, close to Chief Minister Captain Amarinder Singh, has also jumped in the whole matter. In the midst of the ongoing uproar over the state president of the Congress, Manish Tewari presented the caste figures of Punjab. He has tweeted about this. He has written – Equality is the foundation of social justice. In Punjab, Sikhs 57.75 percent, Hindus 38.49 percent, Dalits (Sikhs and Hindus) 31.94 percent. It is believed that Tiwari has made this tweet in support of Chief Minister Captain Amarinder Singh giving the command of the state head to a Hindu leader.

Let us inform that due to the high voltage drama in Punjab Congress, the announcement of Sidhu's coronation was stopped at the last moment. In the whole matter, Punjab Congress in-charge Harish Rawat also came under attack and he had to give clarification in the court of Sonia Gandhi.

In fact, there was a stir in the Congress yesterday as soon as the curtain was removed from the political formula fixed to end the internal war of Chief Minister Captain Amarinder Singh and Navjot Singh Sidhu in Punjab. On Thursday, Congress' Punjab in-charge Harish Rawat talked about making Sidhu the state president, while many senior leaders including Captain gave a message to party president Sonia Gandhi that this is not the right decision. After this, the politics of pressure and pressure has intensified in both the camps. By night, the camp in Punjab Congress reached its peak. Sidhu and the captain held meetings with ministers and legislators close to them.

In the Congress on Thursday, the whole day was hectic from Delhi to Chandigarh. In the morning, during a conversation in New Delhi, Harish Rawat announced that the struggle of Captain-Sidhu in the politics of the state was almost over. He said that after the discussion between the Chief Minister and the Congress High Command, the way for a solution has been found. On the question related to the proposal to make Sidhu the state president, Rawat said that the formula for reconciliation has been kept around this option. Rawat made it clear in gestures that Sidhu would take over the reins of the state Congress.

After this statement of Rawat, there was a stir in the Punjab Congress and there was a sharp reaction from senior leaders like Captain Amarinder and Pratap Singh Bajwa. According to sources, Amarinder Singh raised objections by calling Sonia Gandhi. It is said that apart from Rajya Sabha member Pratap Singh Bajwa, senior leader Kamal Nath and former cabinet minister Ashwani Kumar also raised objections.