The monsoon session of Parliament has started from Monday.

Shiv Sena leader in Rajya Sabha Sanjay Raut said, 'Our question to the government is why are you hiding the figures? how many people died? Tell us the exact figure. The reports are more than the official figures. Today there is a shortage of vaccines in the whole country. Raising the issue of foreign supply of vaccine, Sanjay Raut said, '6 crore vaccines were sent abroad. The Ganges river is the witness to the deaths in India. Section 297 says that dead bodies should not be insulted.

AIADMK leader M Thambidurai, while speaking on the pandemic, appreciated the Prime Minister's visit to Pune and Hyderabad where the production of the corona vaccine is being done.

Discussion on the epidemic in Rajya Sabha

Kharge said, 'How many people died of corona in such a big country, will it remain a mystery? The government reports of more than 4 lakh deaths due to corona in the country. The false figures which the government is releasing are far from the truth. He further said, 'Rashtriya Swayamsevak Sangh chief Mohan Bhagwat said on 15 May 2021 that those who left were freed. This shows what is the policy and intention of the Sangh supporting the government. Trinamool Congress MP Shantanu Sen said, "In Tamil Nadu, elections were held on 234 seats in one day. 294 seats in 8 phases in West Bengal. The infection rate was 2.3% before the election and rose to 33% after that. Congratulations to our Chief Minister, now it is back to 1.8%.

Due to this the Lok Sabha could not run for even five minutes and was adjourned till 2 pm. At the same time, the Rajya Sabha was first adjourned till 12 o'clock, then for one o'clock and for the third time for half an hour. Let us tell you that with the 'Pegasus espionage episode', there is a ruckus by the opposition parties on the issues of anti-agriculture law movement and inflation. Several opposition MPs have already given adjournment motions in Parliament.

Rajya Sabha proceedings resumed at 1 pm, after which BJP MP Swapan Dasgupta said, "The pandemic has been a continuous learning experience for us." For the third time the proceedings of the house were adjourned till 1.34 pm. Rajya Sabha Deputy Chairman Harivansh said, 'All the leaders have met the Speaker to discuss Covid and they have been given permission for this, which will be done after the resumption of the House from 1 o'clock.' Shiromani Akali Dal protested outside Parliament against agricultural laws. Shiromani Akali Dal leader Harsimrat Kaur said, "Only Shiromani Akali Dal is standing against these agricultural laws, Congress is trying to save its chair."

The Speaker of the Lok Sabha has given these instructions:

Lok Sabha Speaker Om Birla, seeing the uproar of the opposition as the proceedings began today, said, 'Bringing placards in the house is against the rules and procedures. If you give notice under the rule, then the government is ready to discuss every subject. You are setting the wrong convention. The Speaker of the House has also asked the MPs who are disrupting the proceedings of the Lok Sabha to follow the rules and procedures.

In the Lok Sabha, the Ministry of Home Affairs said, 'The security of the country is threatened by illegal migrants including Rohingya. There are reports of illegal activities of some Rohingya migrants.

The Monsoon session of Parliament began with a ruckus on Monday, forcing the adjournment of the proceedings of both the Houses. The opposition has been attacking since day one of the sessions over the Pegasus phone hacking case. Congress has demanded a joint parliamentary committee in this matter. On this, the government has termed the report as a conspiracy.

Today, the Finance Minister is going to present the supplementary budget for 2021-22 in the Lok Sabha, while in the Rajya Sabha, Information and Technology Minister Ashwini Vaishnav will issue a statement on the Pegasus issue.

Know the condition of the second day of the monsoon session-

Parliamentary Affairs Minister Pralhad Joshi said, 'There is no link between the government and the Pegasus case. But the opposition is trying to magnify the matter. Let them do their work. The IT minister has already issued a statement on the matter.

The meeting of all the BJP MPs was completed in the Parliament under the chairmanship of the Prime Minister. 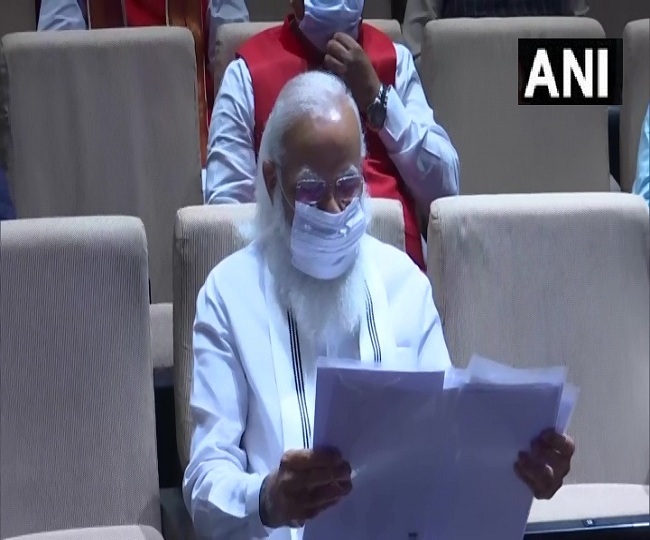 Congress leader Mallikarjun Kharge said, 'The first discussion followed by the presentation. If they don't want discussion and all MPs want to give a presentation, then give it in the central hall. If you can not sit in one place due to Covid, then you can do it for 2 days or even in one day in the morning and evening.

- Congress MP Gaurav Gogoi (Gaurav Gogoi) has proposed an adjournment of the House to discuss the issue of Pegasus.

Electronics and Information Technology Minister Ashwini Vaishnav will make a statement on the 'Pegasus espionage case' in Rajya Sabha today. Let us inform you that the Lok Sabha members of Congress will hold a meeting at the CPP office at 10:30 am today to prepare a floor strategy on the issue of the 'Pegasus espionage episode' media report.

On Monday, the Congress party demanded the resignation of Home Minister Amita Shah, alleging spying of journalists through Pegasus. Leader of Opposition in Rajya Sabha Mallikarjun Kharge accused the Prime Minister and the Home Minister of being spied on by all opposition parties, including Rahul Gandhi. He said that Amit Shah sahib should resign before the investigation in the matter and an inquiry should be conducted against Modi sahib.

Parliament session: TMC is not interested in supporting Congress, may avoid meeting of opposition parties

UP Chunav 2022: Big preparations for BJP before elections, target of making 30-30 thousand new members in all Vidhan Sabhas

Australia: The new law on social media companies will tighten the screws on the trollers, if the victim goes to court, the name and address will have to be given

Science and Technology      6 hours ago

Ananya Pandey showed her captivating performance, will not lose sight of this bold look

Sarah Taylor: Know about the first woman coach for the men's cricket team