Pakistani cricketer's sister dies, said – did not even give a chance to say goodbye

The 30-year-old sister of left-handed batsman Shan Masood, who has played 25 Tests for Pakistan, has passed away. He gave information about this by tweeting. Shan is currently participating in Pakistan's National T20 Cup. Because of this, he could not even come to bid his last farewell to his sister.

New Delhi.The 30-year-old sister of left-handed batsman Shan Masood, who has played 25 Tests for Pakistan, has passed away.He gave information about this by tweeting.Shan is currently participating in Pakistan's National T20 Cup.Because of this, he could not even come to bid his last farewell to his sister.Apart from former Pakistan captain Sarfaraz Ahmed, PCB chairman Rameez Raja, many players from Pakistan have expressed grief over the death of Shaan's sister.Shaan was very close to his sister.This can be gauged by reading his tweet, which he has done after the death of his sister.

Shaan shared an old picture of himself with his sister and wrote that Mishu you were the most precious thing in my life and I didn't even get a chance to say goodbye, I will miss you a lot but I know God takes you to a better place.Please pray for my sister's soul. 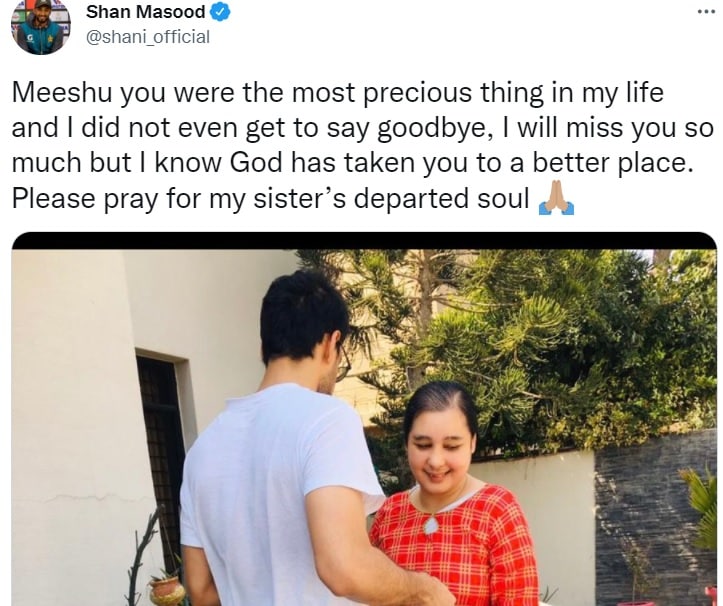 Earlier, in an interview with ESPN Cricinfo, Masood had revealed that his sister Mishu was suffering from a rare genetic disease.Masood had told that due to illness his sister could not develop mentally.However, his physical development was fine.

My sister was special: ShanShan further told in the interview that I do not think there is much awareness in Pakistan about children like my sister.She was special.She was 30 years old, but she had not developed mentally and was like a newborn.He did not get a dependent visa.For this reason, she could not live in England with her parents.My mother used to come and go all the time.My father was running two houses at once to make sure that the sister was well.

T20 World Cup: Football culture has become dominant in West Indies team, players do not play together for years and years

Not only Indians but foreign players will also loot treasure from two new teams of IPL, will become millionaires

Very glamorous in the 'brown' bathtub of Kapil Sharma Show, the actress's style raised the mercury of the internet

Explosions may happen again in America, Pentagon warns, IS may attack within six months

Lalu's counterattack on Nitish in the assembly of Munger, said - what will we kill, you will die yourself

Bombs were blown during PM Modi's rally at Gandhi Maidan, today the court's decision will come on 10 accused

Mouni Roy posted her bold photos on Instagram which raised the temperature of the internet.