It appears former WWE Diva Melina is returning to the company. How soon will she be back and what roster will she be a part of?

As per a report on Friday, it appears former WWE Diva Melina will be making her return to the company. PWinsider.com reports that Melina has inked a deal with WWE to make a return and those reports suggest WWE has had their eyes on this move for some time. 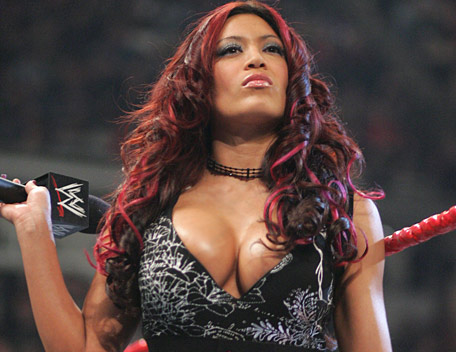 A WWE source has apparently confirmed with news with other outlets, although a press release or statement from WWE has not taken place. Speculation is that the current plan is for her to work on the Raw roster. Some are suggesting she could be back as early as next week.

This is not the first time Melina's name has come up in connection with a WWE return. Earlier this year, there was talk she might be back for the Women’s Royal Rumble. She did return for last year’s Raw Reunion special but there hadn't been much in the way of conversation since that point. That said, she had publicly expressed interest in returning to WWE if they were open to bringing her in.

Melina's previous stint in WWE started 2004 as she worked through developmental and joined the main roster in 2005. At that time, she was part of MNM alongside her then-boyfriend John Morrison and Joey Mercury. Her memorable and unique in-ring entrance was among the most talked-about aspects of her character, but her work in the ring was actually underrated. She eventually left the WWE in 2011.

Recently, she has been working independent shows and popped up with NWA in this last year.

Will She Be Paired With Anyone?

If she's going to be a part of Raw, there are a few people she can be paired with if WWE is thinking about using her as more than just an in-ring performer. Angel Garza and Andrade just split from Zelina Vega and there are a handful of talents on the roster just hanging around with not a lot going on these days.

Perhaps putting Melina with one of those talents could be good for both stars.