Ahmed Patel Passes Away: Many leaders including PM Modi, Rahul Gandhi expressed grief over the death of Ahmed Patel

Senior Congress leader and political advisor to Sonia Gandhi, Ahmed Patel has passed away today. He was 71 years old. Ahmed Patel got corona infected a month ago. He was then undergoing treatment at Medanta Hospital in Gurugram. He was admitted to the ICU on 15 November. Ahmed Patel's son Faizal Patel tweeted and informed about his death. According to Faizal Patel, his father Ahmed Patel died at 3.30 am this morning. Many leaders including PM Modi, Rahul Gandhi have expressed grief over the demise of Ahmed Patel.

Prime Minister Narendra Modi has condoled the demise of senior Congress leader Ahmed Patel. PM Modi tweeted that he was saddened by the demise of Ahmed Patel. The PM wrote that he spent years serving the society. PM Modi has further said that sharp-minded Ahmed Patel will always be remembered for strengthening the Congress Party. I have spoken to his son Faizal and expressed my condolences. I pray to God that Ahmad Bhai's soul may rest in peace. 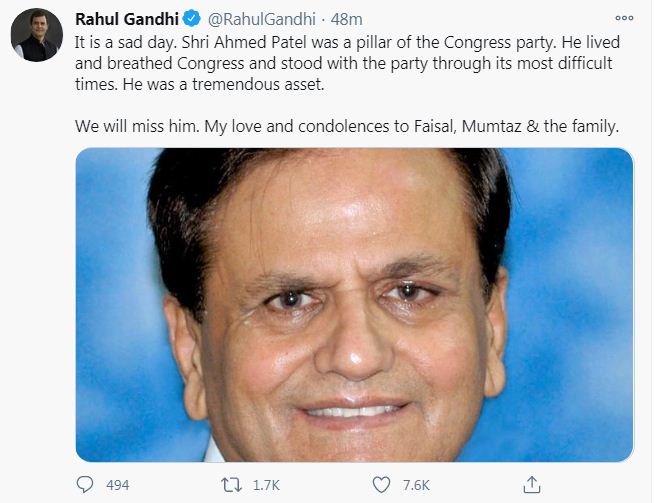 Congress leader Rahul Gandhi has also mourned the death of Ahmed Patel. Rahul Gandhi tweeted and wrote that it is a sad day. Mr. Ahmed Patel was a pillar of the Congress Party. He lived in Congress all his life and lived here and breathed it. He stood by the party during the most difficult period of the Congress. He was a tremendous asset.

Congress leader Priyanka Gandhi also expressed grief over the demise of Ahmed Patel. Priyanka Gandhi tweeted that Ahmad ji was not only an intelligent and experienced colleague, from whom I was constantly seeking advice and advice, but he was a friend who stood by all of us. He was firm, loyal and trustworthy till the end. His death leaves a huge void. may his soul rest in peace.

In an attempt to improve the old equation, JDU tries to help this class through 'Babu Saheb'

MPs will not get cheap food in Parliament now, Om Birla announced this

Shivraj Singh Chauhan said on Tandav web series, no one has the right to hurt our faith

IANS C Voter Survey: Modi is the first choice of 60 percent of the people as Prime Minister, nobody around

All disputed scenes will be removed from Tandav web series, Ali Abbas Zafar told Ministry of Information and Broadcasting, Thank you

Confusion with 4G and 5G smartphones, so know which smartphone will be better option to buy

Important decision of Allahabad High Court on live-in relationship, relationship with another after marriage is a crime