Pirzada Abbas Siddiqui of Furfura Sharif in Bengal has been close to Chief Minister Mamata Banerjee for a long time.

After the meeting, Owaisi made it clear that his party would contest elections under the leadership of Abbas Siddiqui in Bengal. After this, Abbas Siddiqui started preparing to form a new party and on Thursday he announced a party called ISF. While announcing the party, Siddiqui claimed that his party would be the first true secular front in India and would work to bring the disadvantaged sections into the mainstream. He said that a lot of parties claiming to be secular have come into existence since independence, but we have seen that most people have remained deprived except for a section. Muslims, Dalits are left behind. Our aim is to bring the disadvantaged people into the mainstream. Abbas, the president of this party, has appointed his brother Naushad Siddiqui. However, political analysts have called the announcement of Dharmaguru's party a new trend in Bengali politics.

Party organizations will prepare in every district

In a press conference held at Kolkata Press Club on Thursday, Abbas Siddiqui said that in every district we are preparing party organizations. He said that by holding meetings and meetings in the districts, the name of the party and this flag with white, green and blue colors will be introduced to the general public. He said that after understanding the situation and time, a meeting will be held at the Brigade Parade Ground. It is necessary to mention here that another Pirzada of Furfura Sharif and Abbas's uncle Toha Siddiqui stand in support of Chief Minister Mamata Banerjee and Trinamool. After the visit of Owaisi, he had clearly said that all of us are here with Mamata Banerjee.

With the formation of his new party, Abbas Siddiqui is eyeing Muslim voters in the Bengal elections. Muslim voters, with a vote share of 30 per cent, live here in the role of 'kingmaker'. The same votebank was behind Mamata Banerjee's blistering victory in 2011. This vote bank has direct influence on more than 90 seats out of 294 seats in the state. Political experts believe that Mamata's chances of making a dent in this strong vote bank are likely to come in the election of Furfura Sharif Dargah and if this happens, then for the third time Mamata's dream of forming a government with an absolute majority can remain unfulfilled.

Furfura Sharif is a famous dargah in Hooghly district of Bengal. This dargah has special intervention among Bengali Muslims. During the Left Front government, with the help of this dargah, Mamta organized two big movements like Singur and Nandigram. AIMIM chief Asaduddin Owaisi met Pirzada Abbas Siddiqui of Furfura Sharif Dargah earlier this month. He had said that we have the support of Abbas Siddiqui and the decision he will take will be accepted by us.

Peerzada Abbas Siddiqui was a supporter of Mamta Banerjee

Abbas Siddiqui, 38, was once a vocal supporter of Mamata Banerjee. But for the past few months, he has opened a front against Mamata Banerjee. Siddiqui has accused the Mamata government of ignoring Muslims. The Muslim vote has influence in about 100 seats in Bengal and the Furfura Sharif Dargah may have a special role. In such a situation, the formation of Pirzada Abbas Siddiqui of his own party before the elections is not going to prove a profitable deal for Mamata. 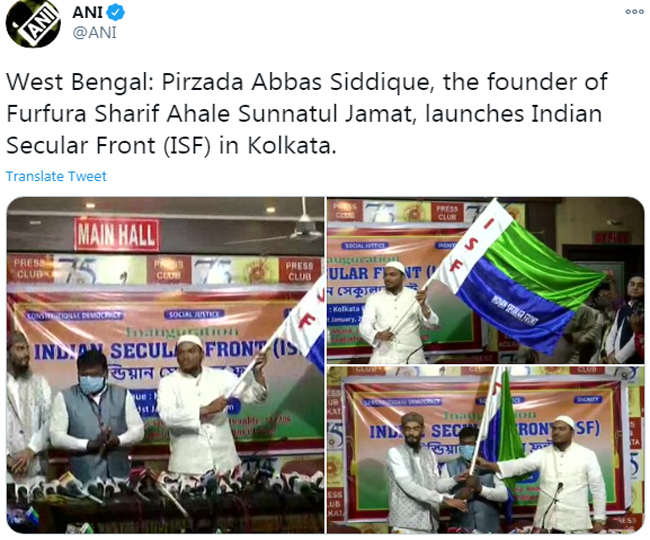 LIVE: Nadda to launch Sonar Bangla campaign in a while, police did not allow in Barrackpore

In the election of West Bengal, for whom can the Owasi's be a profitable deal and who can cause losses?

PM Modi in West Bengal: PM Modi said in Hooghly - BJP government is to be made for real change in Bengal

When the person did such an act in the crowd with Deepika Padukone, the actress was also surprised - Video went viral

Link Aadhar to IRCTC: How to link Aadhaar to IRCTC account, know this easy way