Finance Minister Suresh Kumar Khanna said- The budget 2021-22, with a size of five lakh 50 thousand 270 crore 78 lakh, is an important step towards ensuring the overall development of Uttar Pradesh and making the state economy a one trillion dollar economy Step.

Yogi Adityanath government of Uttar Pradesh presented a huge budget in the budget session of the Legislature on Monday. After getting approval from the Cabinet, Finance Minister Suresh Kumar Khanna presented the largest budget ever in Vidhan Bhavan. Finance Minister Suresh Kumar Khanna started the budget speech after the approval of Speaker Hridaynarayan Dixit in the Assembly.

Finance Minister Suresh Kumar Khanna said that a lot of historical work has been done in the Corona transition period in the state. The government gave maintenance allowance to 54 lakh people. With this, 29.58 crore man-days were created in MNREGA. 40 million migrant workers were sent by roadways to their homes. He said that 2020 has been a challenge for the whole world. Along with this, the police department along with the state's medical system also worked on a large scale.

Khanna said that the government is very serious about the health of the people of the state. A provision of 1950 crores is proposed for this. New Lab to be set up at Sanjay Gandhi PGI, Lucknow. With this, nine medical colleges are being constructed. A separate new arrangement will be made for diabetic patients at PGI Lucknow.

Focus on development of Ayodhya and Airport: Yogi Adityanath Sarkar State's focus is on air connectivity with Ayodhya. In the budget, the government has given Rs 2,000 crore for the Jewar Airport of Greater Noida and Rs 101 crore for Maryada Purushottam Shriram Airport in Ayodhya. With this Chitrakoot and Sonbhadra Airport will be activated in 2021. The airport to be built in Ayodhya will be named Maryada Purushottam Shriram Airport. 140 crore has been given for the development of Ayodhya along with the airport. A national inspiration site will be developed at a cost of 50 crores in Lucknow, while 100 million has been arranged for the metro in Varanasi-Gorakhpur.

Allocation of Rs 20 crores for construction of Advocate Chamber in various districts. A corpus fund of Rs five crore has been allocated for the welfare of young advocates. Atal schools will be opened in all mandals of the state. Along with this, 2000 rupees are proposed in the Atal Drinking Water Scheme. There is a provision of 15 thousand crores for the Jalajivan Mission. A budget of 22 crores is proposed for Arogya Water in the state. In the Abhyudaya scheme, selected candidates will be given a tablet on the basis of merit for the preparation of competitive examinations. 1107 rupees will be given to Purvanchal Expressway.

Presenting the budget, Finance Minister Suresh Kumar Khanna said that the budget for 2020-21 is dedicated to the youth and their employment. They are giving protection to every woman of the state. The government is taking tough action against the culprits. The budget provides for the goal of making UP self-reliant. He said that grievances are being dealt with fast. More than 6800 crore rupees have been sent to the accounts of farmers. A provision of Rs 400 crore has been made in the budget for affordable loans to farmers.

How many budgets received

Culture and charitable work - 364 crores:  On the centenary of the Chauri Chaura incident of Gorakhpur, a provision of Rs. 15 crores for the year-round event in the Shatabdi Festival. A provision of Rs 300 crore for the access road to the Shri Ram Janmabhoomi Temple Ayodhya Dham in Ayodhya. A provision of eight crore rupees for the construction of Uttar Pradesh Tribal Museum in Lucknow and four crores for the freedom struggle museums in Shahjahanpur. Uttar Pradesh Gaurav Samman will be awarded to any noted writer and artist who has not been awarded any award till now. Maximum five persons will be honored each year. Each person honored will be awarded a sum of Rs 11 lakh.

Forest and Environment  Department  - Rs. 1065 crore: Target to increase forest cover and tree cover by 15 percent by the year 2030. The target of the plantation of 2021 and 2022 is set at 65 35 crores. Budget provision of Rs 600 crore for the symbolic afforestation plan. A provision of 400 crore rupees to encourage social forestry program. 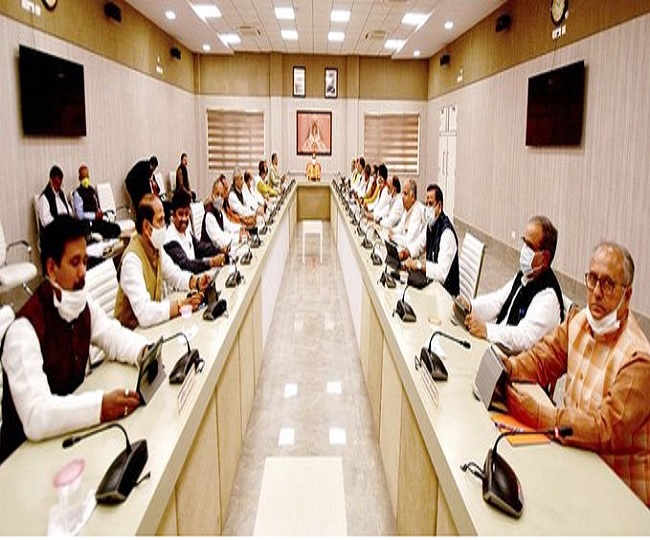 Earlier, a cabinet meeting was held on Monday before the Uttar Pradesh government's budget, chaired by Chief Minister Yogi Adityanath. The meeting approved the budget 2021-22.

Finance Minister Suresh Kumar Khanna performed pooja in his house before going to the cabinet meeting at the official residence of CM Yogi Adityanath before presenting the Uttar Pradesh government's budget. Finance Minister Suresh Khanna read. The Finance Minister carried out the puja with a budget bag, during which he had an iPad with a budget bag in his hand. He said that this time too the focus is on Sabka Saath, Sabka Vikas. The Yogi Adityanath government takes care of the interests of every class. Khanna said that it is the effort of our government that all 33 crore people of Uttar Pradesh should get the benefit of the budget. 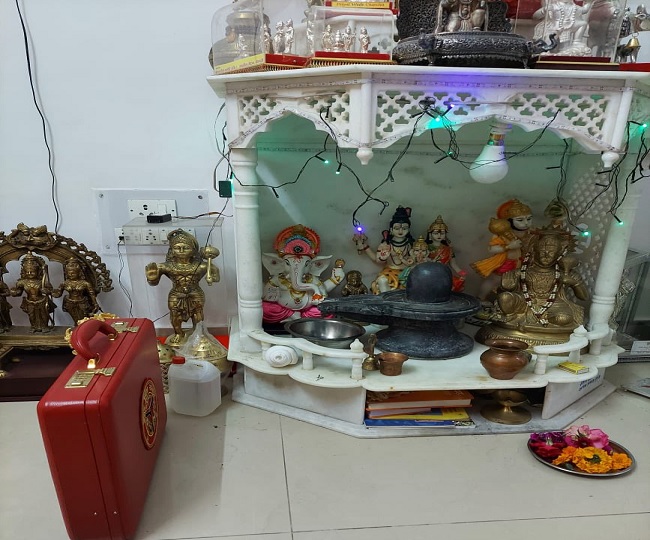 Finance Minister Suresh Kumar Khanna has prepared the budget amidst the pressure of the Kovid-19 epidemic and the echo of the long farmer movement. This time an iPad has been provided to all MLAs and Legislative Council members to see the budget. Along with this, a big screen has been installed in Vidhan Bhavan, on which members will be able to see a glimpse of the budget. The budget session of the state government began on 18 February with the address of Governor Anandiben Patel, in which members of both houses were present.

UP Budget 2021: View full budget on your mobile, download this app from play store

A shocking incident occurred in Hapur, the criminal entered the house and threw acid on the girl, causing chaos

Writing caste-sensitive words on vehicles will be costly, after UP, challans will also be cut in this state

Demand to set up farmers commission at center and state level, PIL filed in Supreme Court

Big decision of Delhi government, students up to eighth will not have annual examinations

Indian Railways: Why is the railway charging more passengers than passengers, the reason behind doing this ...