The first look of Abhishek Bachchan's next film 'Dasvi' has been released. Tushar Jalota is making his directorial debut with this film. Yami Gautam and Nimrat Kaur are playing important roles in the film.

Seeing Abhishek Bachchan in his fans web series. Many of his films and web series are being released on the OTT platform, but his films have not been released on the big screen for many years. He is away from the big screen for the last three years. His film 'Dasvi' was being discussed a lot for some time. Now the first look of his film has been released. Abhishek Bachchan has shared the first look of the film on social media. Apart from Abhishek Bachchan, Yami Gautam and Nimrat Kaur are also playing important roles in the film.Abhishek's domineering look is seen in the poster, in which he is wearing gold earring. His look looks great as well as fun, due to which the fans are feeling thrilled about the film. It is believed that this will be a social comedy film. While sharing the film's poster, Abhishek tweeted, "Meet Ganga Ram Chaudhary." 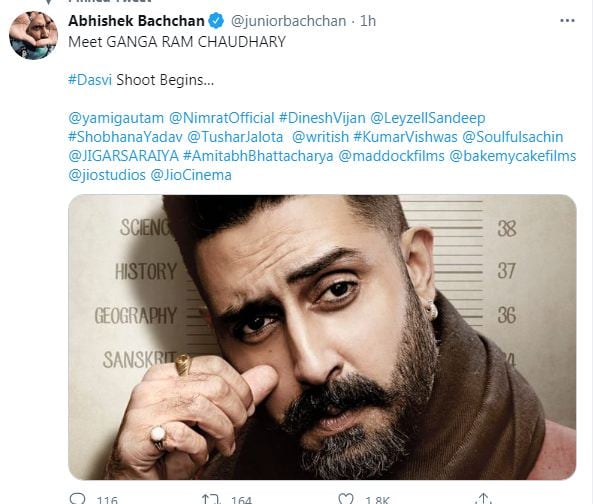 The film is being directed by Tusshar Jalota. This is his first film as a director. The producer of the films is Dinesh Vijan, who was also the producer of films like 'Stree', 'Bala'. According to reports, the tenth shoot will be held in Agra's Central Jail. The production team of the film has reached Agra, where the team has also prepared their set in jail.The story of the film 'Dasvi' revolves around a domineering leader, who is less educated and who gets imprisoned for his actions. In jail, the leader is taught a lesson of discipline. He passes his tenth from jail on the strength of his ability.
Apart from this, Abhishek Bachchan will be seen in the film 'Bob Biswas', which is being produced by Shahrukh Khan. In the film, Abhishek's opposite Chitrangada will be seen in the lead role. Abhishek's film 'The Big Bull' is set for release. The film is based on the Harshad Mehta scam. Ileana Dikruz, Nikita Dutt and Ram Kapoor will also be seen in the film. Kuki Gulati is directing this film. Ajay Devgan and Anand Pandit are the producers of the film.

Pawan Singh will make a blast to the tune of Salim Suleman, post the video and give the information himself