The results of the 6 metropolitan municipalities of Gujarat will be declared today.

The results of the election of the 6 metropolitan municipalities of Gujarat will be declared today. The counting of the elections for the Municipal Council has started with the ballot paper. EVM machine will be opened after completion of ballot paper counting in all the six metropolitan municipalities. Votes are being counted at 22 places in Ahmedabad, Surat, Vadodara, Rajkot, Jamnagar, and Bhavnagar. The EVM will open at around 9:30 pm. About 24 hundred candidates are in the fray for the 575 seats in 6 metropolitan municipalities. Polling agents of BJP and Congress are reaching vote counting centers. Separate arrangements have been made for the sitting of candidates, their agents, and counting staff at all counting centers. By around 10:00 pm, the estimates of the municipal defeat in six will start coming out in the Ahmedabad Mahanagar Palika, counting for 192 seats, 120 in Surat, 72 in Rajkot, 64 in Jamnagar, 52 in Bhavnagar, 120 in Surat, and 76 seats in Barora. Will be.

9:08 AM- Ahmedabad workers of Aam Aadmi Party reached Gujarat College counting center for alleged tampering in EVMs. Even before the counting of votes began, the Aam Aadmi Party has accused the EVMs of tampering. A large amount of police force has been deployed as soon as the workers get information about the gathering. 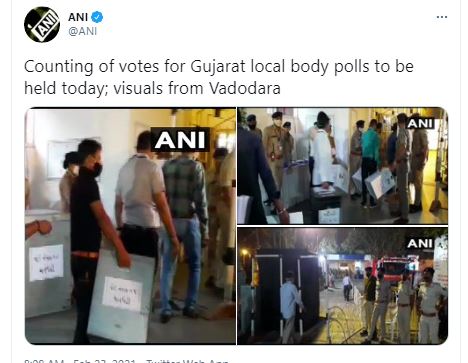 Election 2021 Dates Update: Declaration of election dates in five states including Bengal, know- when, how, in how many stages elections will be held

Voting for the second phase of Andhra Pradesh Panchayat elections is going on, elections are held in 4 phases